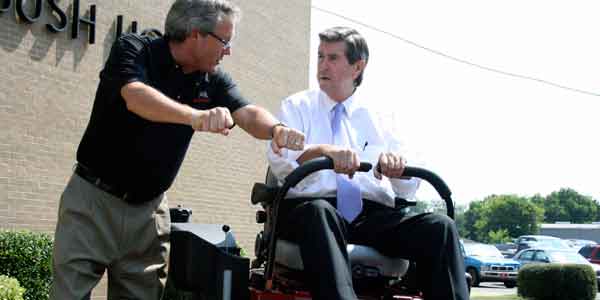 SELMA — Lionel Melton, stock keeper at Bush Hog, has fewer worries at his job since the city council here voted in April to close the roads around the plant.

“We were afraid the company was going to leave because of the danger that was involved with the pedestrians waking the streets, trucks coming out in the streets and children on their way to school,” Melton said. “You don’t have to watch for that now. You can continuously do your job without being worried about running over someone or striking someone or someone even hitting you.”

Gov. Bob Riley visited Bush Hog Friday to announce a $300,000 contribution to complete the $500,000 project to close roads around the plant, build a road extension over the railroad and install safety arms for the railroad crossing.

“This is a big deal,” Riley said. “Bush Hog is a cornerstone of this economy over here and I’m more than happy to come over and give them the recognition that they deserve and tell them again how proud we are to have them here.”

Money will come from either the Economic Development Fund, Department of Transportation funds or both, Riley said.

The remaining $200,000 totals contributions from Bush Hog, EDA, the city, and the Dallas County Commission.

“Now we have all the funding so there is no adverse impacts to the neighbors at all, which was a big issue,” said Howard May, vice president of operations for Bush Hog.

Bush Hog also donated property to create a road to extend Helen Street at the end of Griffin Street. The new road will offer residents access J.L. Chestnut for what is about a 150-foot longer distance from the prior access on Vine Street.

The new road will also have a new crossing station with crossing arms.

Police report for period ending at midnight on Aug. 4