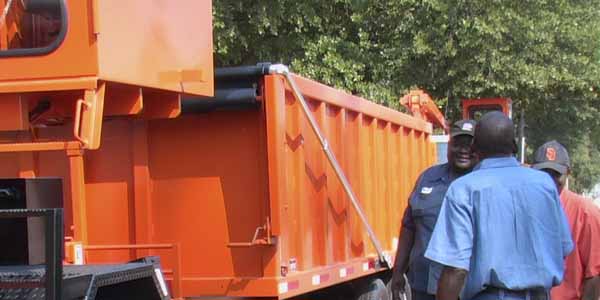 Now the city has six trucks to pick up trash — limbs, leaves, boxes — pulled to the side of streets and not considered household garbage.

Randolph James is a driver and operator. He’s glad to see the new tools come in. Monday he showed the air conditioned cab of the truck, offset by the orange trailer and operational cab in the back.

“The trailer has a net,” James said as he turned a crank. “It will keep leaves from blowing out.”

The trash trucks were purchased with a portion of the bond issue approved by voters last year.

James said he expects them to take to the roads later this week.

City officials said the only hurdle left is to have the trucks insured before they are road ready.

Remember ‘all have sinned…’

Dear editor, Show me any person from George Washington to Martin Luther King, Jr. that you wish to honor and... read more