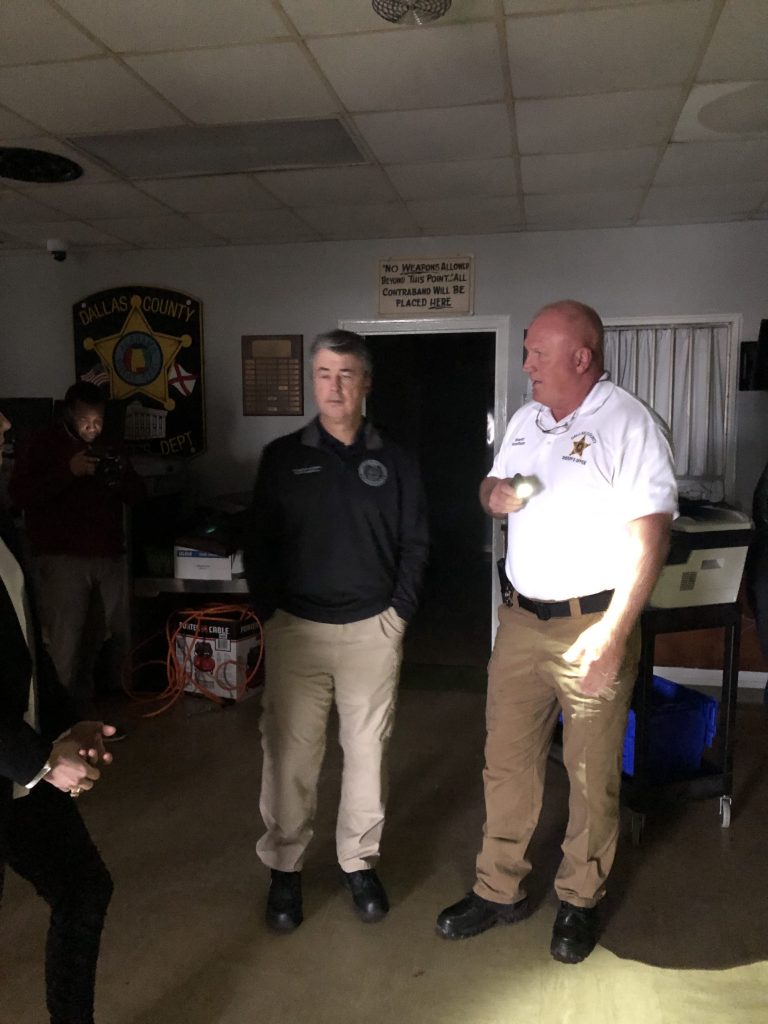 The Dallas County Jail was badly damaged from the tornado that hit the area on January 12.

When the tornado roared through Selma, parts of the jail was flooded and portions of the roof peeled away. Equipment inside the facility was damaged as were several offices.

Granthum said that all 130 inmates and 20 juveniles   were transported to facilities across the Northern and Southern portions of the state by the Alabama Sheriff’s Association. None of the inmates were injured.

“We were blessed not to have anyone get hurt,” Granthum said. “We were able to close the jail in less than five hours. The Sheriff’s Association helped us a lot.”

Dallas County Probate Judge Jimmy Nunn said the Dallas County Commission has a scheduled meeting with insurance adjusters on Thursday to assess damage to jail. They are covered by Peak Insurance.

“The insurance company will tell us whether the jail can be repaired, restored or torn down,” Nunn said. “They will tell us how to proceed.”

The Dallas County Commission is responsible for running the jail, Camp Perry Varner and the Juvenile Detention Center.

Nunn said that Dallas County has a maintenance agreement for $200,000 a year on the jail, but he couldn’t give an amount it cost to run the jail.

“I don’t have an amount what it costs the county to run the jail because of equipment, supplies, medical expenses and transporting inmates,” Nunn said.

Nunn said that employees at the jail are still working. Some were seen this week cleaning up the facility from the storm damage.

Granthum said he isn’t sure if the jail could be repaired or reconstructed.

“Insurance is a process,” Justice said. “We’ve got pretty good insurance. It will take a while to get estimates and a plan.”

Nunn said that an agreement has been made between the Dallas County Sheriff’s Office and Selma Police Department if a person gets arrested in the area.

Nunn said that an agreement has been made between the Dallas County Sheriff’s Office and Selma Police Department if a person gets arrested in the area.

“Anyone who commits a crime will be booked and taken to another county, per agreement with the county” Nunn said.
“It takes a little more time to travel and the county will have to bear a little more cost in travel. They are still prisoners out there, so the care for the inmates are still ours.”

Granthum sees a few problems with repairing the jail and the inmates currently transported to other areas across the state. “If we do repairs in the jail, we will have a mold problem,” Granthum said. “Moving the inmates is another problem because some of them have court dates coming up in Dallas County.’