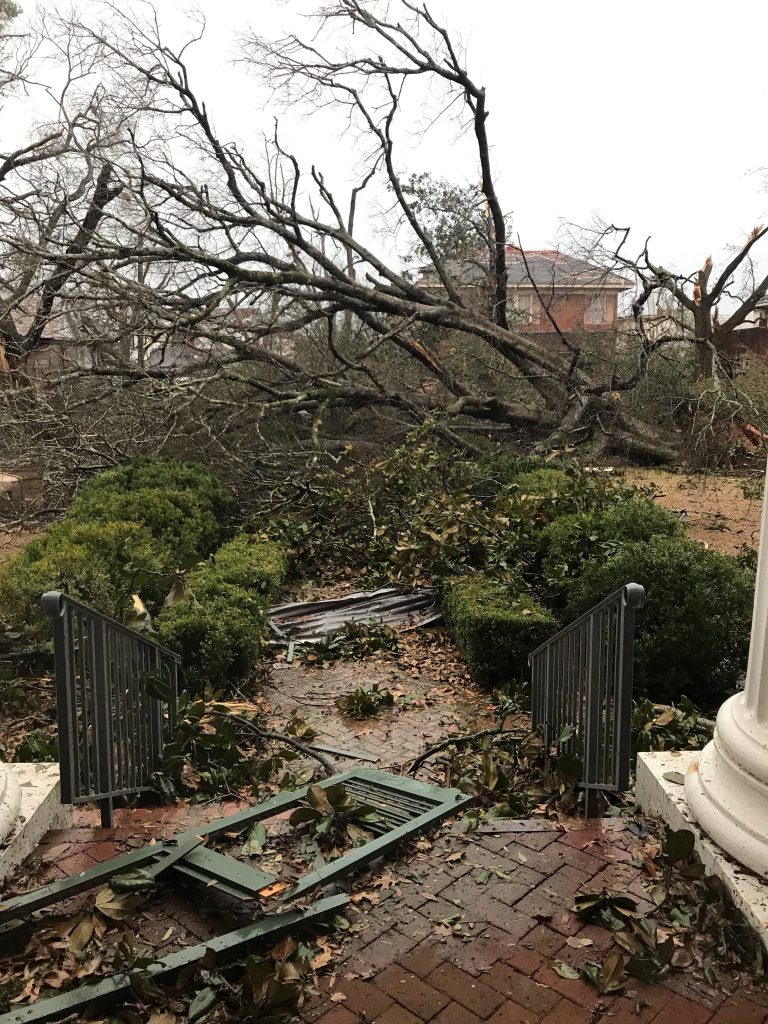 Submitted photo: Photo from the back porch of Sturdivant Hall in Selma. Photo taken by museum coordinator Mary Margaret Mims.

The tornado that devastated Selma left destruction in its wake and nothing was safe from its path of destruction, including Sturdivant Hall, likely one of the most iconic and historically significant old homes in Selma.

“It is amazing the house survived the storm,” Sturdivant Hall Museum Coordinator Mary Margret Mims said. “The house was built back in 1853 and is definitely a very solid structure. We have some broken windows from flying debris [and] lots of trees down. There is a lot of clean up to do on the grounds but Sturdivant will be back in shape hopefully soon.”

Rachel Metcalf lives in an apartment on the grounds of Sturdivant Hall and helps at the museum as a volunteer. She was not at the museum at the time of the tornado but when she saw the damage she knew that it was a gut punch to the historic structure.

“It was tough to see all the old trees down and windows broken out of the house,” Metcalf said. “But I’m glad no one was hurt.”

Mims was in the building when the storm came through and she said it was sudden and powerful.

“It happened very quick,” Mims said. “We heard it and looked out the back door and you could see it coming quickly. We took cover in the hall.”

Sturdivant Hall is considered one of the finest examples of Greek revival neoclassical architecture in the Southeast. Built in 1852-1856 and designed by Thomas Helm Lee, the home served as a townhouse for Col. Edward Watts. The 10-room, 6,000-square-foot mansion cost $69,900 to construct. Artisans from Italy were brought in to do the plaster and marble work throughout the home. The marble was imported from Italy.

Also known as the Watts-Parkman-Gillman Home, in 1864 Watts sold the home to John McGee Parkman, a local banker. Following the end of the American Civil War, Parkman was made president of the First National Bank of Selma. The bank engaged in cotton speculation and accumulated huge losses. The military governor of Alabama, Wager Swayne, had his Reconstruction authorities take possession of the bank and arrest Parkman. He was imprisoned at the former Castle Morgan in Cahaba. Assisted by his friends, Parkman attempted to escape from the prison on May 23,1867, but was killed.

Sturdivant now serves as the backdrop for weddings and community events, with partygoers seeking shade from the century old majestic, Spanish moss draped live oak trees that dotted its grounds. Many, if not most, of those trees were uprooted or likely damaged beyond repair in Thursday’s tornado.

Mims said the museum is closed until further notice while repairs to the structure is made and the grounds are cleared of debris.