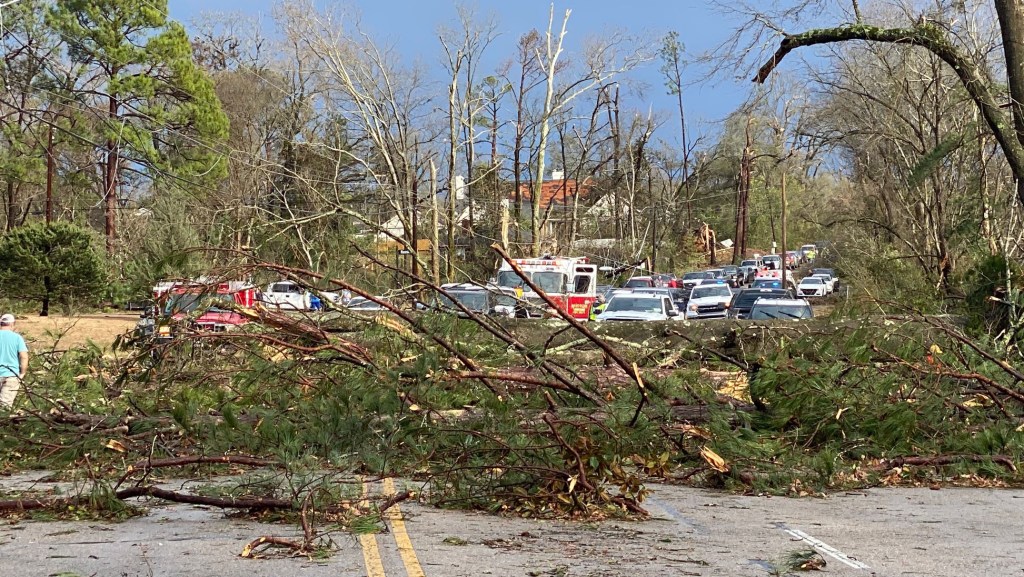 The stories of survival and fear were too numerous to count Friday as many in Selma recounted their experience riding out what the National Weather Service has said was an EF-2 tornado that struck downtown Selma.

Hope Smith was one of those people, having a normal day at work at the Downtowner Restaurant just off Broad Street in downtown Selma when it quickly became apparent something bad was about to happen.

“We kept hearing sirens going off,” Smith said. “There were people inside, we had people inside eating. We finished up what we could before it got there and then we looked down we went to the bathroom and then in split seconds it was gone.”

As she huddled in fear inside the restaurant’s bathroom, Smith said the sounds she heard were similar to what others who have been through a tornado recall hearing.

“It was like a train,” Smith said. “Or like a vacuum sucking. I mean it was just loud and then it was just gone. It didn’t really rain but before and right after.”

Around lunchtime the Downtowner normally has a big crowd and so when the storm came through Smith and the rest of the staff did their best to get the customers to safety.

“Wow,” she said. “Normally tornadoes like that don’t go through downtown Selma. It was definitely a first for me. I know it hadn’t looked like that since the hurricane last year.”

Emily Morrow was sitting in class at Meadowview Christian School on Old Orrville Road when the emergency alerts began going off.

“I think it was about 11:40 when our teachers phone went off with the tornado warning,” said Morrow, who is in her junior year at the school. “Like immediately after, the school bell rang for the tornado drill and it was surprisingly calm at first. I don’t think any of us took it seriously.

When the storm finally hit the school the power went out in the building and from then on the students knew things were bad.

“Everyone in the class was making jokes and just talking. Then we started to hear more thunder and the lights cut off,” Morrow said. “I will say, I think what made it a little more scary was the fact that we had a news station playing and we were hearing everything that was happening and the worst it sounded on the news the more worried everybody else got.”

Even though the windows in the classroom were boarded up, Morrow said the sounds they were hearing caused alarm for everyone.

“For maybe like two minutes we just heard hail and like I don’t know, maybe debris hitting the windows, the walls, and the ceiling,” Morrow said. “We had the windows covered but it was really loud for a few minutes and then complete silence. I think we were in the eye of the storm for a good bit. For those two minutes, it was very scary.”

During the storm the students got their phones back to contact their parents but there was a problem with service.

“For like 10 minutes the teachers had decided to let us have our phones back because we are not allowed to have our phones during school,” Morrow said. “Everyone had gotten genuinely worried about what was going to happen so we were trying to call our parents, our siblings, friends outside of school and at one point, I think it was just Verizon because the majority of us had Verizon but the service cut out. So we had to share other peoples’ phones.”

After the storm had passed, Morrow said the ride home was slow and shocking.

“The first thing I remember was just being shocked of how much the surrounding area had changed. I’m not used to seeing destruction like that so close to where I am. I mean there were trees down, there were power lines down, cars had been flipped over, houses had been completely wrecked. It was really bad.”