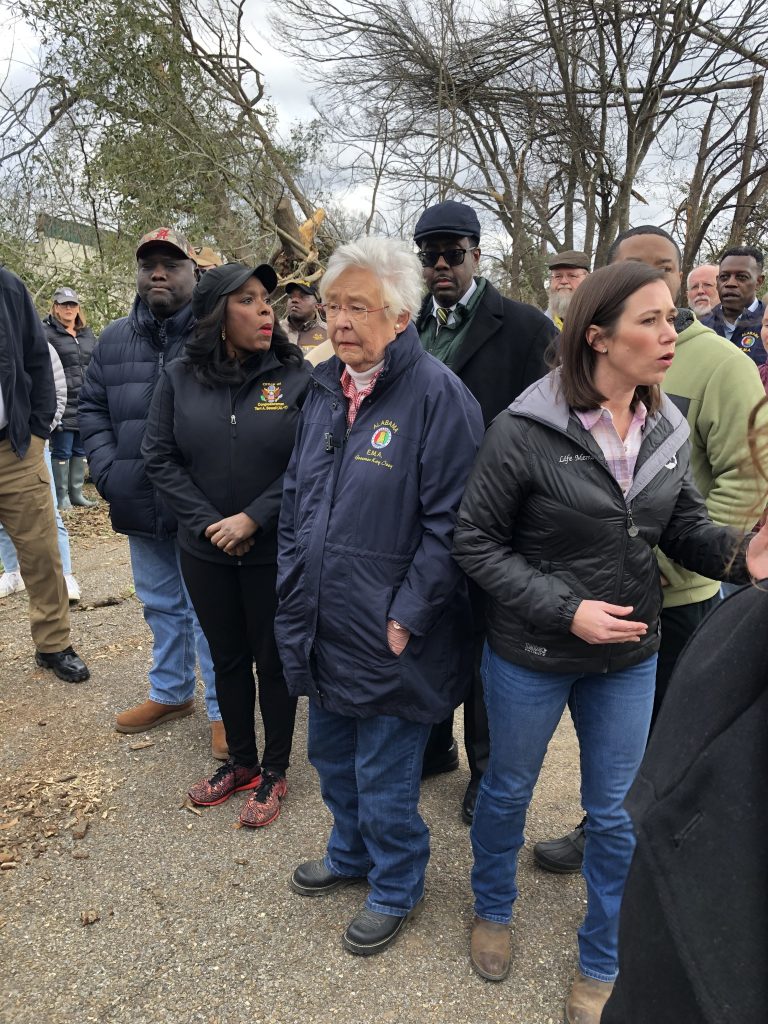 Governor Kay Ivey traveled to Selma Friday to survey the damage of the tornado that struck the city on Thursday.

Ivey was accompanied by Senator Katie Britt on the trip and they briefly spoke to the media. Ivey declared a State of Emergency in Selma on Thursday.

“The storm was very revealing, worse than anything I’ve ever seen,” Ivey said. “What I saw on television, the trees look like toothpicks.”

Britt, who was sworn in earlier this month, vowed she and Ivey will help Selma recover from the damage.

“This will be a total team effort,” Britt said.

“When our backs are against the wall, we stand up. Thank you to the first responders and linemen who are courageously serving their fellow Alabamians.

Selma Mayor James Perkins spoke to Ivey about the city receiving state and federal financial assistance on  the storm damage. He told Ivey that the Selma City Council, Sewell, and Chestnut are ready to step up and help improve condition.

According to the National Weather Service in Birmingham, at least an EF2 tornado hit the Selma area.

“We have major challenges in Selma and we ask for a speedy recovery,” Perkins told Ivey.

Ivey told Perkins that the state will help Selma recover

“I have  already contacted the White House and FEMA, and I will call President Joe Biden and ask him to expedite federal disaster assistance,” Ivey said.

Perkins continues to say that the tornado split a third of Selma.

Sewell said that Selma will heal from the tornado damage over time.

Britt said she was saddened to see what happened in the Queen City.“We will do what we have to help Selma recover,” Britt said.

The White House released a statement after the tornado struck Selma.

“Our hearts and thoughts go out to the Selma community and everyone impacted by the storm, White House press secretary Karine Jean-Pierre said.

“Our team here is monitoring and assessing and reaching out as appropriate to state and local officials to offer our support.”