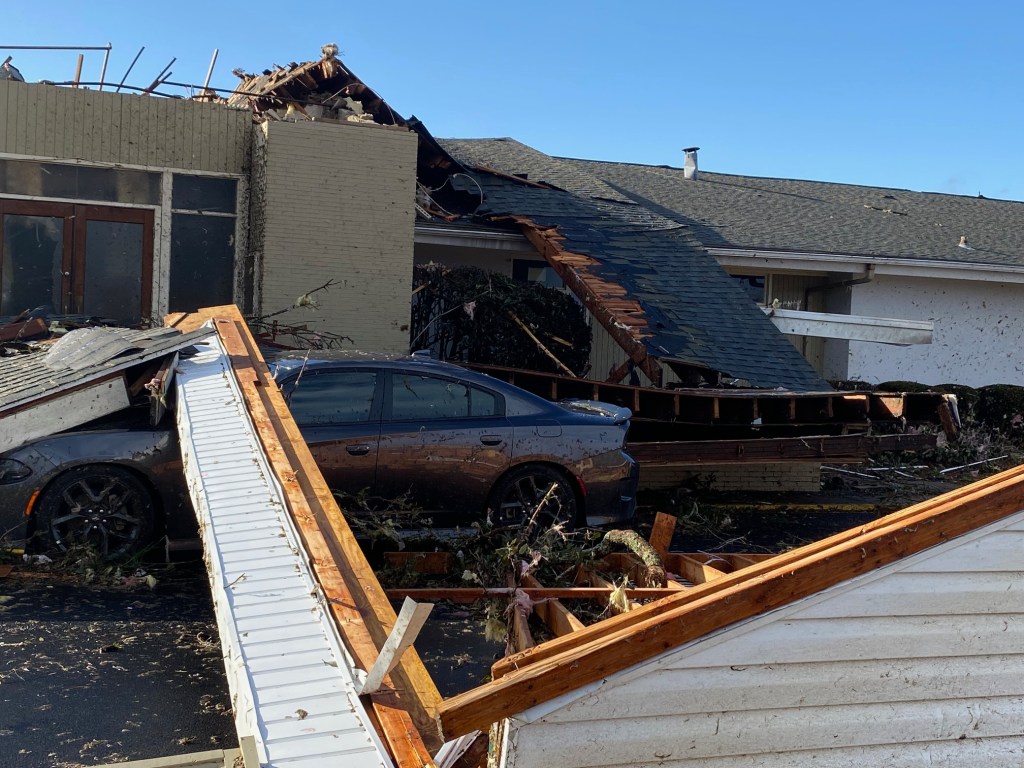 The city of Selma was devastated by a strong tornado Thursday that roared through town damaging hundreds of homes and businesses and causing widespread power outages throughout the city.

The storm struck the city around noon, and was part of a strong line of thunderstorms that moved through the state leaving major destruction in its wake.

Much of the damage in Selma was located in the western part of the city, with thousands of trees either uprooted or snapped off, many of them landing on or in people’s homes.

One structure that took major damage was Selma Country Club, which had its roof blown off. The club’s golf cart storage building was totally destroyed, with cars in the club’s parking lot moved from their parking spaces, their windows blown out.

Dallas County EMA Director Toya Crusoe said no deaths from Thursday’s tornado have been confirmed, but there have been confirmations of injuries as the sound of ambulances navigating through the city was widespread and frequent.

One business that took a direct hit from the tornado was George’s Paint & Body, near the intersection of Broad Street and J.L. Chestnut Blvd. in downtown Selma.

“I’m thankful we’re alive and no one got hurt,” said owner Eric Haugen. “I don’t know where to start, but it could’ve been worse.”

“If you don’t need to be out, don’t go out,” Perkins said. “We have a lot of downed power lines, there’s a lot of danger on the streets, and we need to make sure that you remain safe.”

Ward 3 city councilman Clay Carmichael, whose ward includes much of Selma’s historic Old Town area, said he was just trying to “wrap his head around” what had happened, with much of his ward devastated by downed trees and damaged homes.

Carmichael said the city of Montgomery and other cities were dispatching crews to Selma to help clear debris, and there were many instances of neighbor helping neighbor to help clear roads and remove downed trees.

“There’s a lot more in front of us that we’ve got to deal with,” Carmichael said. “Things like this bring people together, asking ‘How can I help?’ There were instances like that all over town.”

Perkins and the city council met late in the day and declared a state of emergency in the city, allocating $2 million from the city’s surplus revenue fund for cleanup.

Dallas County Probate Judge Jimmy Nunn said that while damage throughout the city and county was extremely bad, there was a silver lining in that there were no confirmed fatalities.

“When God moves His hand, there’s nothing that we can do except accept it and pick up the pieces,” Nunn said. “That’s what we’re doing at this time, trying to assess the situation. We pray to God we don’t have any type of fatalities. That’s the main thing. We can replace a building. We can replace a car. But we cannot replace a life.”