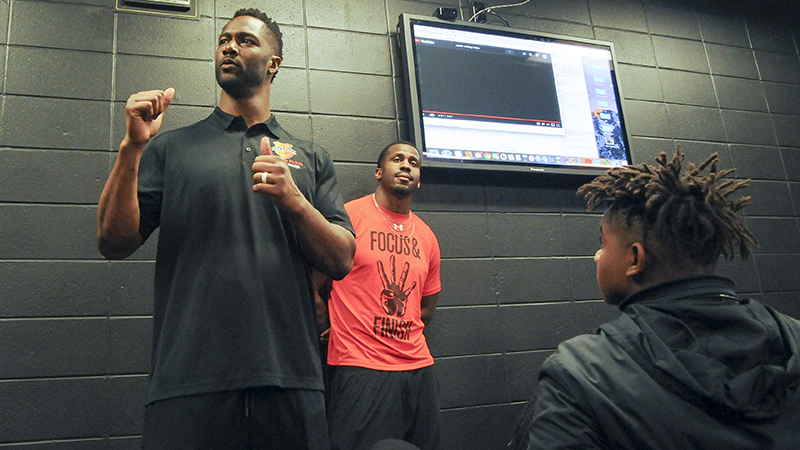 Cincinnati Bengals defensive end Michael Johnson addresses the students at his Kids and Technology Day at WCCS after a coding class.

The Michael Johnson Foundation and Selma High School have teamed up to start the Selma Scholars Challenge.

The Selma Scholars Challenge is a step in the healing of Selma High School after the death of sophomore student Tremaine Mitchell Jr. last month.

The Selma Scholars Challenge allows students to find an alternative way of expressing themselves in different ways while working towards a prize. The challenge is broken down into four categories; Music/Video, Poetry, Graphic Design, and Art/Drawing.  The winner of the challenge will receive a cash prize.

Selma High School’s Dr. Alisa Smiley is spearheading the challenge and feels that this will go a long way in helping students understand the seriousness of drugs and mental health.

“I’m the mental health/truancy officer for the whole district,” Smiley said. “I cover all of our schools including the alternative school and then our saint’s virtual academy. So I see how trauma affects not just a scholar at Selma High, but these students who have siblings in school. It’s like kids are impacted on a daily and weekly basis. It depends on what’s going on in the community. We definitely saw that with Tremaine. It was definitely sad. Back to the challenge, these kids now have a to not only express themselves but the theme is centered around substance abuse and mental health.”

Former NFL defensive end Michael Johnson is another part of leading the challenge.

Johnson spoke at an assembly after Mitchell’s death.

Johnson said this is a big deal in the healing of the students and all involved at Selma High.

“I believe it will help them heal,” Johnson said. “A part of the healing process is being able to express yourself and unload. A lot of times we hold in thoughts and emotions that can sometimes erupt in a negative way. This challenge encourages them to use healthy and creative outlets to express whatever they may be feeling.  And I think that’s important. It’s actually a form of therapy.  And hopefully, it also helps in removing some of the stigma surrounding mental health. It’s ok to not be ok. But let’s talk about it. Put it on the table, get it out so that you don’t walk around like a ticking time bomb.”

Selma City Schools Superintendent Zickeyous Byrd has been a big part of helping Selma High heal up since Mitchell’s death. He feels this challenge will be a big step in the healing process at the school.

“We are always grateful for Michael Johnson and for all that his foundation does to help Selma City Schools,” Byrd said. “The Michael Johnson’s Selma Scholar Challenge is just another example of what Selma has produced in regard to its alumni, and it’s absolutely phenomenal that alumni such as Mr. Johnson have taken a big part in not only helping the school heal from our young scholar’s death, but also to learn the dangerous drugs that are out there in communities and their harmful effects.”

The final date to submit entries for the challenge is January 31.