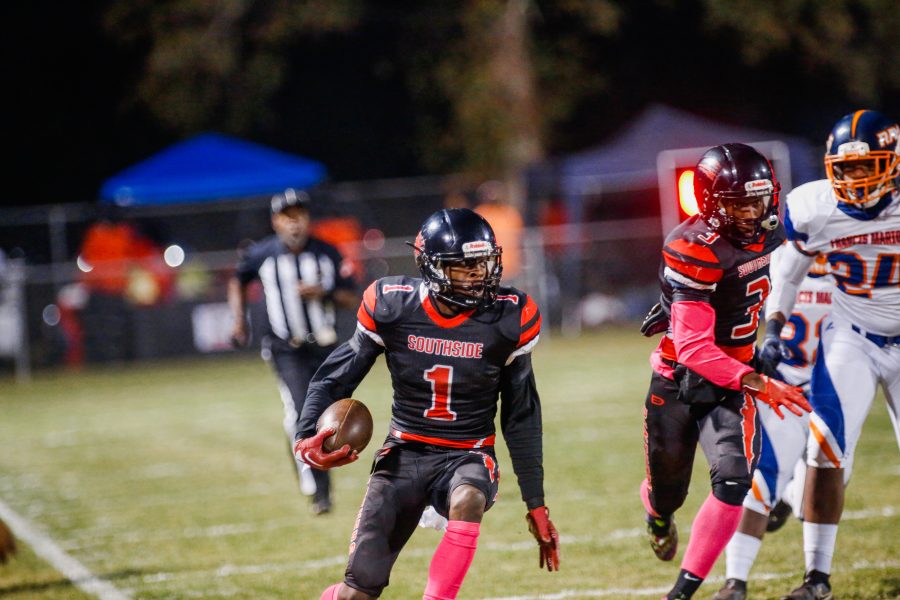 Both players earned All-State honors by the Alabama Sportswriters Association. Smith made Class 3A first-team at defensive back. Creech was second-team defensive pick at AISA.

Smith, a sophomore, could have easily earned defensive MVP because of his skills as a hard-hitting safety. At the position, Smith had 98 total tackles with four interceptions and 14 quarterback sacks.

But it was Smith’s big-play ability at wide receiver that led to him getting the offensive MVP award. He had 57 receptions for 1,391 yards, 10 touchdown and added 1,005 yards rushing on 58 carries and eight more touchdowns.

“Being named offensive MVP as a sophomore means everything to me, it just motivates me to go harder,” Smith said.

Southside head coach Charles Moody said Smith’s unique skill set is why SEC schools like Alabama and Arkansas are heavily recruiting him. “He has great ball skills and know how to focus on the ball and not the defenders that surrounds him,” Moody said. “He is very illusive and can score from anywhere at anytime from multiple positions.”

Creech emerged as one of the state’s top linebackers following an exceptional senior year and making second-team All-State by the ASWA.

Creech had 115 total tackles, including 85 solo, three fumble recoveries. four caused fumbles, and three quarterback sacks. “I’m thankful and happy that I was named defensive MVP,” Creech said. “I really enjoyed my senior year and grateful for the accolades. It was fun.”

“Allen Michael is a great kid who put everything he had into being successful,” Raines said. “He’s a tough young man-both physically and mentally. He’s also very intelligent. Allen Michael is so unselfish. He always wanted to help the team. He was definitely our leader on the defensive side of the ball.”’