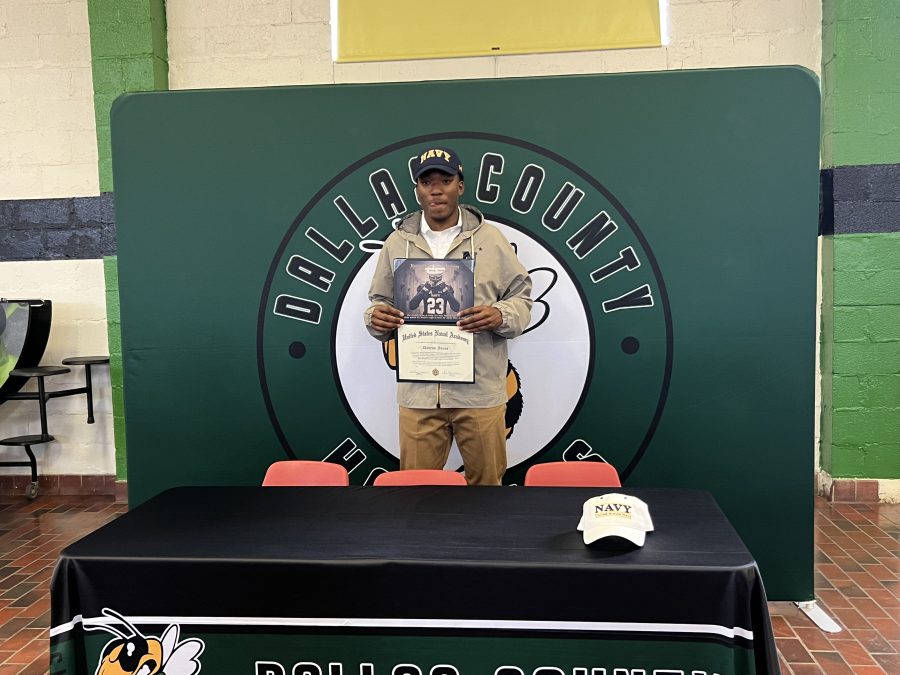 Dallas County High linebacker Daveon Jones along with family and friends signed his letter of intent Wednesday to play football at the United States Naval Academy next year.

Jones’s mother and father had smiles as they watched their son sign his letter of intent to play for the Midshipman.

Once Jones gets to the Naval Academy, he said he’s ready to play and says they are getting a player ready to go.

“They are getting someone who is physical,” David Jones said. “a real fast and athletic player.”

Dallas County Head Coach Douglas Laister said that the Navy is getting a special player. Jones also played wide receiver for the Hornets.

“(He’s a) Very mature young man that’s self-motivated and driven to be productive and prosperous,” Laister said. “When I arrived, I laid out a blueprint and told him to believe in everything I’m asking him to do and he will have an opportunity to play Division One college football.

“He had the size, potential and grades which was a big selling point when I shared his film with college coaches. During the offseason, he put in the work to develop his skills consistently. He has a bright future ahead of him. He will make his family, and the DCHS Hornets family very proud. Signing a full scholarship to play Division One Football shows that there are great things happening at DCHS and you can expect more great things to happen.”

Jones’s mother Gloria said that not only is Navy getting a good football player they are getting a great young man.

“They are getting someone who is very determined and very disciplined,” Gloria Jones said. After signing his letter of intent Jones said he felt blessed with the people who had come out to support him on his big day.

“I’m extremely blessed,” Daveon said. “I’m excited and I am just blessed to be here. I’m blessed to be put into this position. All glory goes to God.”

It was the relationship that Daveon had with Navy’s coaches that led him to decide to sign with them over the other schools that gave him an offer.

“The relationship with coach Newberry and Coniglio made [with me] when I went up there on my official visit. There was nothing like it.”