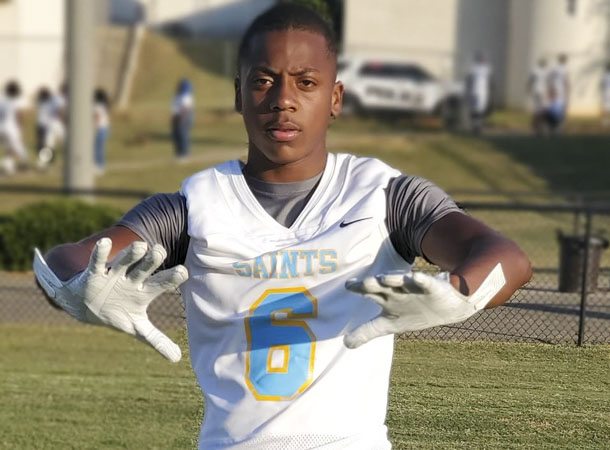 It has been a big week for Selma High School’s DaKaari Nelson.

On Wednesday, Nelson signed a scholarship to play Division I football at Penn State

Nelson has been named the Selma Times-Journal football player of the year.

“I’m excited and thankful,” Nelson said. “It’s my first time being nominated for something like this so yeah I’m super excited.”

He earned Alabama Sportswriters Association All-State honors for the second straight year. He made 72 total tackles, 10 touchdowns, and eight interceptions on the Class 5A first-team defense.

Nelson said that last season was important for him and his Saints teammates, making it one to remember.

“Last season was a rollercoaster,” Nelson said. “Last year, we had the chance to make a little bit of history by winning the most games in school history, but we fell short of that. So last year we went through a lot of stuff. The seniors on the team last season were coach Willie Gandy’s freshmen.

“We were freshmen when Gandy got there. So throughout our high school years, he led us. We worked four years with him to get where we wanted and when we got there we fell short.”

Week after week, Nelson made play after play. Even though Nelson was getting in the stat books, he said the players around him deserve a lot of credit.

“I’m very grateful for them,” Nelson said about his teammates.

“ It’s a team sport. When I got the ball, it took them blocking for me and then making the right blocks allowing me to score. If I got an interception, it took them pressuring the quarterback for me to get that interception. Without them, none of this would have been possible.”

Penn State head football coach James Franklin told Pennstate.rivals.com  on Wednesday that Nelson will be a good addition to the Nittany Lions next season.

“I think the other thing that we’ve done a good job of, we’re going to have to continue to do a good job, is kind of branching out and going to more places. Obviously DaKaari [Nelson] in Selma, Alabama, is a really good example of that,” Franklin told the website.  “At the end of the day, we’re still talking about what I would describe as Penn Staters, Penn State kids and Penn State families. You get a chance to spend some time with DaKaari and his family, his dad is the principal of the school, mom is phenomenal. They’ve done a great job raising DaKaari.”