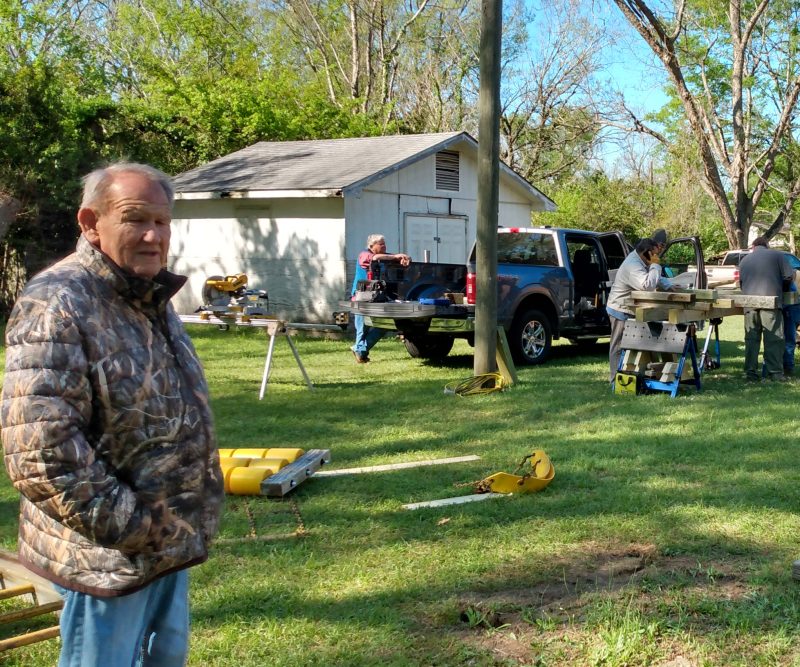 Special to The Selma Times-Journal

John Haden Smith was volunteering with a mission project – United for the City – at Water Avenue Baptist Church two summers ago, when he saw that the children he was serving had no place to play.

After Bible lessons, the children wanted to play outside, but the old wooden play structure at the church had rotted and was unsafe.

Growing up in a community-minded family, John Haden, then 17, knew he had to do something. He had a locker full of tools, mission-hewed building skills, and best of all, a group of friends – youth and adults – dedicated to serving others.

As a member of Selma Boy Scout Troop 46, founded in 1955, John Haden knew he could count on his Troop – from the youngest Scout, 13-year-old James Caleb Duncan, to the 77-year-old Head Scoutmaster, local attorney Fred McCormick, to live up to the Boy Scout oath, “to help other people at all times.”

He knew his Troop would silently step up and serve – just as they had over the years when they cleaned up the dugouts at Bloch Park, built outdoor seating at Old Depot, volunteered at the Selma Animal Shelter, tore down an old fence at Safe Harbor, rebuilt the footbridge at Kenan’s Mill, cleaned up historic cemeteries, cleared hiking trails at Paul Grist park, refinished floors at the (old) YMCA, indexed books at the library, cut down overgrowth at Old Cahawba, and cleaned up church grounds in Selma and Orrville.

And he believed that planning and completing this project – a safe and sturdy playground set in a neighborhood with no few city playgrounds — would help him earn the coveted Eagle Scout award, the highest rank of Scouting. It was an achievement he promised his beloved grandfather Harry “Teddy” Holloway, who died in 2018, he would earn.

“He never became an Eagle Scout and always regretted it,” John Haden said. Here’s a video of kids at the park: vidallaboutkidsplayScout.mp4

In its 67-year history in Selma, Troop 46 — the oldest continuously active Boy Scout troop in Selma – has produced 117 Eagle Scouts, with a record 7-10 young men, led by John Haden, who have been together since Cub Scouts, expected to be awarded together in a ceremony in early 2023.

Much of the credit goes to Scoutmaster McCormick, a 1959 Eagle Scout, who has guided the troop over 40 years, along with co-leaders Robert Stapler, an engineer with Alabama Power, and Harold Wells, who retired from Bush Hog. The troop leaders have camped, met, traveled, and taught hundreds of Scouts, and seen their sons, grandsons and nephews earn the prestigious Eagle Scout award.

While the national organization has faced several controversies, the core of Boy Scouts has always been the home-grown troops like #46, along with three other troops in Selma and hundreds across the country – that project the wholesome, fresh-faced exuberance of Scouting, while holding fast to the century-old traditions and values to young Scouts who are unfailingly polite, hardworking, athletic, and active in their churches and schools.  It’s a story Troop 46 says doesn’t get told enough.

“The Boy Scouts made me the person I am today,” said the newest Selma Scoutmaster Dr. Richard Johnson, head of surgery at Vaughn Regional Hospital. A 1988 Eagle Scout, Johnson is passionate about the importance of Scouting, dedicating hours of his limited free time to the troop, including leading Sea Base and Boundary Water canoeing adventures.

“Any topic I was interested in, I could learn more about. I got every merit badge but book binding and bee keeping,” Johnson said. “Scouting is about providing a great environment for kids to learn important life lessons; leadership, dependability, maturity, respect.

On a recent Monday night, Troop 46 Scouts and Scoutmasters met in the fellowship room of Cornerstone Presbyterian Church, where the Troop has met weekly for the past 66 years. Two Scouts were playing ping pong, several Scouts talked to their Scoutmasters about their planned community service projects, a requirement for Eagle Scout, while others worked on merit badges. It takes 21 badges to pave the way for Eagle.

Johnson arrives in scrubs, with his Scout son Jack, 15, and talks with Scout Will Lewis about his upcoming interview for Eagle Scout award if the Orrville Scout passed the test.  They also talked about their Sea Base Adventure last May. Lewis was one of the lead sailors boating near the Virgin Islands, a trip Dr. Johnson led; snorkeling, swimming, sailing, studying salt ponds and sea turtles were part of the six-day adventure.

Lewis ended his summer with a 10-day backpacking trek through the mountainous wilderness at Philmont Scout Ranch in Cimarron, New Mexico.

Whether it’s the high adventure camps or just a weekend at a local lake, Troop #46 Scouts love the outdoors. Knot-tying and fire building (without matches) contests, fishing, canoeing, and sleeping on hammocks under a star-studded sky rank as the best part of Scouting.

“Scoutmaster McCormick’s homemade blueberry cobbler cooked over an open fire is great,” Lewis  said. “Except for that time I mistook salt for sugar,” McCormick added with a wide smile.

While regaling listeners with other camping trip mishaps, including the time McCormick and Stapler capsized their canoe while carrying all the weekend supplies, it’s clear that good rapport and respect, along with laughter, create a great Scout experience.

“I was a single mom when my sons started Scouts in Troop 46, and it was so important for them to have that strong male influence,” said local CPA Amy Pilcher, who helps Scouts earn their personal management merit badge.  “I so appreciate the positive influence of men who taught my kids life skills.  It meant a lot to my children and to me. I always knew they were in good hands.”

Former Boy Scout Jim Creech, who owns Pilcher-McBryde Drug Company in Selma, believes strongly in the program as well, with his oldest son Jay, a college senior, earning his Eagle Scout in Troop 46, while his youngest son, Allen Michael, is working on his.

“Boy Scouts build character, teach the importance of persistence and hard work, and develop leadership skills,” said Creech, who went to Philmont with his youngest this past summer.

On a cold Saturday last spring, Troop 46 leaders and Scouts and volunteers including John Haden’s dad, Brad, met at the small Water Avenue Baptist Church yard to bring John Haden’s vision to life. The Scout had raised more than $3,000 from West Central Baptist Association, businesses and individuals, to purchase the materials he needed, including lumber, bolts, swings and more.

After dismantling the old set, Scouts laid the new lumber on the ground like a life-size Lego set which had to be put together, which John Haden had lots of experience with. Scoutmaster McCormick, who had just had surgery, showed up to lend support. “It’s a real good project,” he said.

It took several weeks – interrupted by a sports tournament and rainy weather – and lots of trips to the hardware store and lumberyard, Selma Bolt and Fuller Building Supply, fortunately just a few blocks away, to finish the project. One afternoon, Scout Allen Michael Creech came after school to help John Haden, because that’s what Scouts do – help one another – and because he believed it would be great for the kids in the community.

Finally, the last bolt was fastened, the last swing hung, and the slide slipped into place – just after school ended and a day before John Haden and his family headed to a hurricane-damaged Mexico Beach, Florida orphanage on a mission trip.

The reward for all the work came on a sunny afternoon when it was “tested” by some of the same children who had wanted to play the previous summer.  The magic of playground fun was heard in the children’s laughter and squeals of delight as they were climbing, sliding, swinging, and racing around the Scout-built set. Finally, one four-year-old boy, standing atop the 6- foot platform called out with glee, “I’m king of the mountain.” John Haden, who has known since he was an 8-year-old Cub Scout that he wanted to become an Eagle Scout, knew just how he felt.

Christine Weerts, a freelance writer, lives in Selma. She loves the Scouting program: she was a Girl Scout and both her brothers were Boy Scouts; her youngest brother earned Eagle Scout.