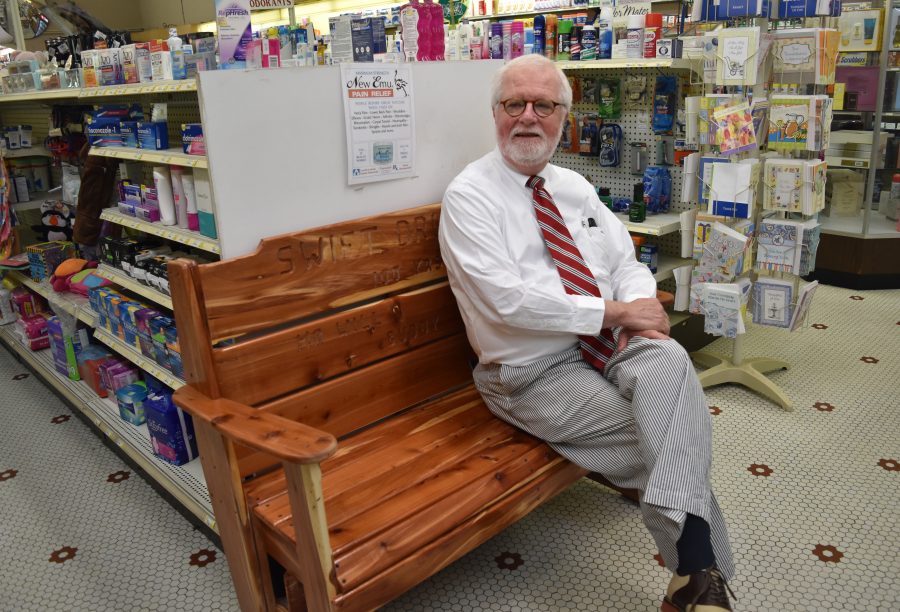 The year was 1916, and the First World War was raging in Europe when George A. Swift and his bookkeeper brother, William P. “Will” Swift collaborated to open Swift Drug in a still iconic building in downtown Selma. For 106 years after that October day, Swift Drug Company has been serving generations of Selma and Dallas Countians by providing quality products, customer service, and plenty of smiles and handshakes along the way.

On December 23, an end of an era will happen when Swift Drug Company will close its doors forever.  William P. “Buddy” Swift III, who has owned and operated the business since 1972, is closing due to his doctors discovering a malignant tumor in his pancreas. His last day at Swift Drug Company was Wednesday and he underwent surgery Friday.

“The doctor told me it would be a two-month recovery period and I decided it was time to close the store,” Swift said. “I can’t be out that long. That’s what made me decide that I need to close down at this point and time.”

Three generations of the Swift family have owned and operated the business at 217 Broad Street in a building that rose from an empty lot owned by the Peters family, who operated Selma Marble and Granite at the time.

Over the years the drugstore underwent several changes.

Originally, the structure only had two stories. In 1926, a third floor was added to accommodate room for more physicians.

At one point, the drug store had a soda fountain, which was wildly popular with locals and visitors, who would sit at the drug store’s counter and watch the “soda jerk” make their favorite beverage, which was a combination of flavored syrup, carbonated water, and other ingredients such as malt powder or ice cream.

“At one time, we did like everybody else did and put aluminum on the outside of [the building]. Brightly colored and all,” Swift said. “Then some years ago we took all that off and restored it to its original appearance.”

Swift’s grandfather passed the business along to his sons, pharmacist William P. Swift Jr. and George “Cap” Swift. Cap Swift eventually left the business to become the executive director of the Selma/Dallas County Chamber of Commerce and later opened the Selma Welcome Center.

The store was passed on to Buddy Swift after he graduated from pharmacy school at the University of Alabama in 1972.

“I came just to hang around for a little while until I could go to law school,” Swift said.

“I’m very proud to be a third-generation in the family business. I’m really honored and so proud of my ancestors who started the business and kept it going.”

Selma is blessed with other locally owned and operated drug stores, with two of them being located a short walk from Swift Drug Company. Carter’s Drugs and Pilcher McBryde Drug Company never saw Swift as a rival, but more as a friend whose business acumen helped draw customers into downtown Selma, thus improving the business climate for all.

“We don’t treat each other as competition, we’re great friends,” said Tim Williamson. who owns Carter Drugs. “Swift created a lot of opportunity for us. Selma is an unusual place for its size because it has so many independent pharmacies, whereas Prattville has only two independent pharmacies.”

Jim Creech, who owns Pilcher McBryde said what made Swift a great asset is his decades of experience which gives him the ability to serve as a sounding board and assist when needed.

“Swift and I always talked to each other, sharing ideas and comparing notes,” Creech said. “He’s been a great resource. We have a wonderful relationship with Swift Drug Company and Carter’s Drugs.”

Swift said the professionalism and friendship of Creech and Williamson have been invaluable through the years.

“We’ve always had a good relationship; it was tough, friendly competition,” Swift said. “It was about serving the community.”

Generations of Selma and Dallas Countians have been the benefactors of Buddy Swift’s kind-hearted service and expertise, including Dallas County Commissioner Jan Justice and her husband, Larry Justice, whose family have been customers at Swift Drug Company for decades.

“This business has been such a vital part of Selma’s history,” Jan Justice said. “The loss of yet another family-owned business is so sad for our community. The corporately owned business will never support a community like locally owned.”

Larry Justice called the closing of Swift Drug Company the end of an era.

“It’s like losing a family member,” Larry Justice said. “The Justice family has been doing business with Swift Drug for 80 of the 106 years they have been open. They have always been there taking care of our parents, our children, and now our grandchildren. My very first charge account was at Swift’s. They would deliver, even in the country if needed. It’s not just Buddy, it’s all the staff, that seem like family.”

“It hurts to lose a downtown business that’s been around as long as Swift’s,” Carmichael said. “They were a staple for me during my walks home after daycare at Little Friends. They will be missed.’’

“Swift Drugs is a strong institution in our community, where healthcare, family, and the community intersect,” Stewart said. “The impact on Dallas County and surrounding communities is immeasurable. They will be sorely missed.’

“Swift Drug Company is a historic store that helped define the city of Selma,” Jackson said. “It had the old-time feel when you stepped in there to fill your prescription or pass through to get on the elevator to get to an office, it will be truly missed.”

“I shopped there many times during my years in city hall,” Evans said. “The professional services and smiling faces were always appreciated. I am sorry about the closure of Swift Drug Company. Thank you, Swift family, for 106 years of service to this community.”

Hearing praise like this warms Swift’s heart, and he admits the decision to close the store has taken a toll on him emotionally, as well as Margie, his wife of 49 years. Swift said what he’ll miss the most are his employees and customers who have patronized Swift Drug through the years, whether it was his great uncle, grandfather, father, or himself who served them.

“I am sad not to have that relationship with the customers anymore,” Swift said as he looked around the place that has been a part of his life for 50 years. “We’ve had loyal customers who’ve been good to Swift Drug Company over the years. And we always took care of them. We were very fortunate that we had a good business.”

Swift said he worked with Walgreens, which bought his prescription inventory and Swift Drug is also holding an inventory clearance sale in advance of the store’s closure later this month.