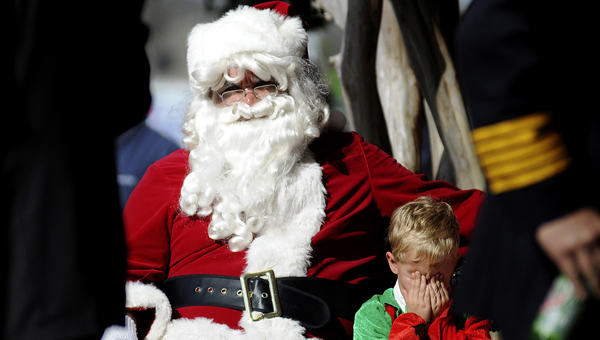 Parade aftermath: Santa Claus sits on a bench at Selma City Hall during the city’s tree lighting ceremony Saturday. Next to him is one of his elves, who is both exhausted from the earlier parade and trying to shade himself from the sunlight. --Tim Reeves

Santa Claus will be staying in Selma over the next month.

Santa will be at the Selma Mall until December 26, when Christmas is recognized as a legal holiday because it falls on a Sunday this year.

According to Selma Area Benefit Coordinator Tondia Wilson, the decision went back and forth on when to bring Santa to the Queen City before Thanksgiving.

“We changed our minds several times,” Wilson said. “We asked the Selma Mall manager several times when would be the right time, especially with school being out (Thanksgiving week).

‘We wanted to bring Santa in town early because there’s so much going on in the city.”

The schedule from Wednesday through Saturday is from 3-6 p.m. and Sunday, 1-5 p.m.

“We also wanted to get everyone in the Christmas Spirit and people to spend family together,” Wilson said.

The event is powered by www.area-benefits.com