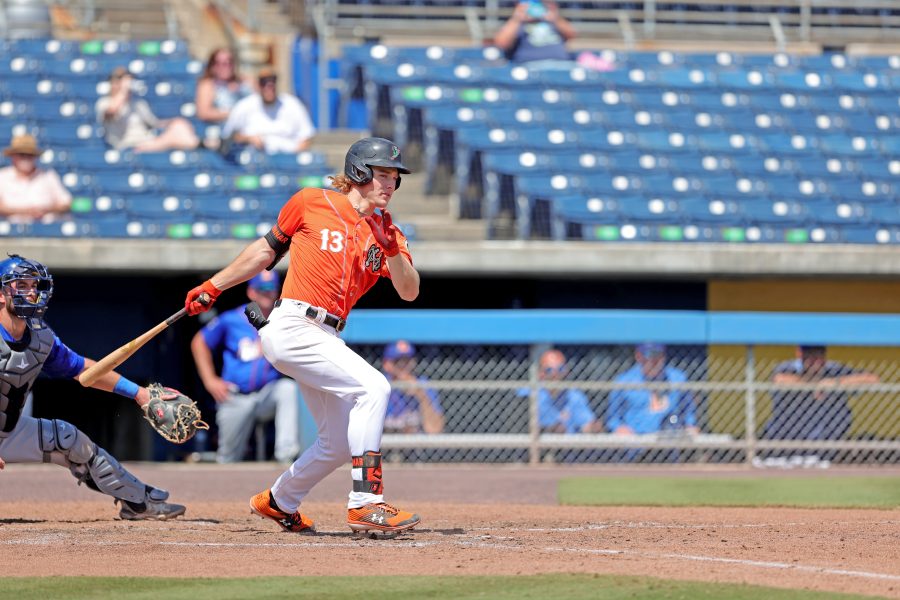 Former Morgan Academy baseball standout and Selma native Gunnar Henderson continues to climb the ranks of the minor league affiliates of the Baltimore Orioles, the MLB franchise that made Henderson the 42nd overall pick in the 2019 MLB Draft.

According to an MLB Pipeline Top 100 Prospects list generated Aug. 17 by MLB.com, Henderson, who plays third baseman and shortstop, ranks as the No. 2 prospect behind catcher Francisco Álvarez, who competes for the New York Mets’ Triple-A affiliate, the Syracuse Mets.

Henderson’s 2022 season began with the Double-A Bowie Baysox before he was called up June 6 to the Triple-A Norfolk Tides. Nearly a month and a half later, he was chosen to play in the 2022 SiriusXM All-Star Futures Game.

“It’s been a pretty fun year so far,” Henderson said. “Just being able to have those experiences and being able to play in those types of situations, I felt like it has been a very good experience for my development. I’m looking forward to hopefully carrying it in the big leagues, but you’ve just got to take each and every day, just try to get better and better, and just be the best player I can.”

On the eve of his 21st birthday, Henderson achieved a statistical feat with the Tides that hadn’t been accomplished in 22 seasons – he hit for the cycle June 28 in an 8-2 victory over the Gwinnett Stripers.

“I can’t thank God enough for putting me in the positions that He has,” Henderson said. “I’m very fortunate to be able to accomplish that, but it was really exciting to be able to do that. It really didn’t hit me until after a few days, being able to do that and it being that many years ago. It was such a cool experience.”

Henderson credited his hitting coaches for his 14-game hit streak from July 10 through Aug. 3.

“I feel like we come up with a good plan for each individual pitcher that I’m facing. I feel like I’ve been executing pretty well, so I’ll just keep doing that and looking forward to how everything else goes.”

During the Futures contest held July 16 at Dodger Stadium in Los Angeles, Henderson scored two runs – a feat many a kid who played baseball at any level has merely dreamed of accomplishing.

“Growing up, this is what I’ve always wanted to do, just being able to play major league baseball,” he said. “To have the opportunity to play at a major league stadium at this age was pretty awesome. I felt like it was a great experience for development.

“Like I said, growing up, it was always my dream. Mom and dad can attest to it. That’s what I’ve always told them growing up, and to have that opportunity to hopefully play in major league stadiums for a long time, it’s really humbling.”

Following the Futures game, Gunnar took some time during the All-Star break to come home to Selma. He said he was able to get a couple workouts in, but his main focus was visiting family and friends.

“I hung out with my little brother, Cade, and my older brother, Jackson,” Henderson said. “We all had dinner. I just got to catch up with some friends, and then, my younger brother took me fishing on his boat. It was good to just kind of hang around and get back to it – just kind of get back to home for a little bit and get right back to playing ball.”

Though the call-up to the big leagues could theoretically come at any moment from the Orioles’ front office, Henderson said he doesn’t put too much thought into that scenario.

In the meantime, Henderson said his focus is to try to help his team get into postseason contention in Triple-A.

“I’d love to be able to make a playoff push with them,” he said. “We need to get it rolling here pretty soon, but just to be able to do that and get back into the playoff atmosphere that we were fortunate enough to be in last year in Double-A, that would be really awesome.”

Henderson said he’s grateful for the veterans he’s played alongside during his journey, and it’s been good for him to be able to pick their brains and receive feedback on his game.

Henderson said the rapport he established with current Tides manager Buck Britton when they were both together in the Baysox organization has been helpful in his career.

“We continue to hone that relationship,” Henderson said. “He knows the type of player I am, and I know the type of person he is. We have that respect for each other, and I enjoy being able to play for him.”

Morgan Academy head baseball coach Stephen Clements said Henderson is more than deserving of the accomplishments and achievements he’s had in his still-young career.

“First off, I’m just super-excited for Gunnar for the way he handles himself,” Clements said. “He’s a better young man than he is a baseball player, and that’s hard to beat, if that makes sense. I’m just excited his hard work is paying off … The amount of hours and time he puts into his trade is unbelievable.

“During the offseason, he’s here practicing with us, and he’s out here with his former teammates. Most of them are kids that are so young now that they didn’t play with (him), but it’s kids that were just looking up to him as he (came) up. He’s out here just like he’s a coach, spending his time teaching them to field ground balls, kind of giving them hitting lessons and instructions. I couldn’t be happier for a young man.