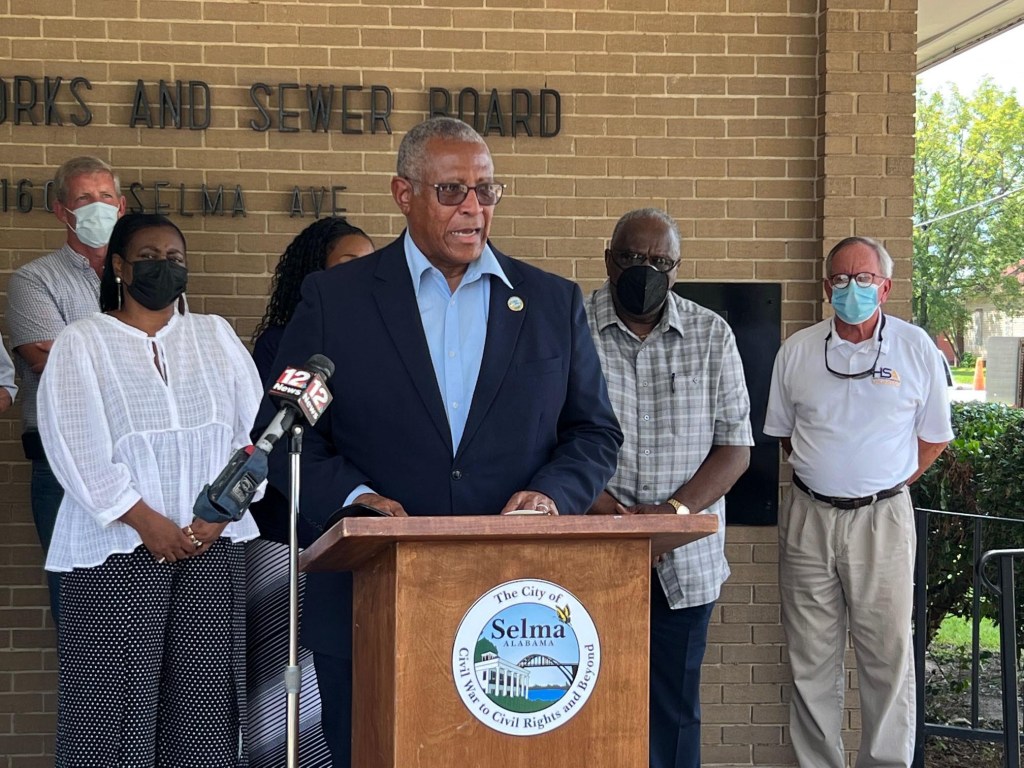 Selma Mayor James Perkins Jr., members of the Alabama Department of Environmental Management (ADEM) and representatives from the Selma Waterworks and Sewer Board held a press conference Tuesday morning to announce Selma Waterworks will be receiving $15,099,027 from ADEM.

The money will be used to replace 866 lead service water lines throughout the city.

“Understand that we are replacing all the lead pipes within our system, those that directly connect to our residential areas and in the downtown areas,” Perkins said. “This is a huge opportunity for us.”

Perkins said this project was one among a list of $500 million worth of infrastructure challenges he and representatives from key agencies within Dallas County and Selma identified.

“We just took a little bite out of that apple, if you will, with about $15.1 million,” he said. “I was hippopotamus happy and peacock proud. This is a great team that we have that works here, and a lot of folks don’t know the great work that they do here. I’ll tell you, these folks do a lot of great work in our community, and it’s hard work.

“It’s hard work on the ground because when you see them out on the ground, what they’re doing is they’re down in holes and working to fix our water lines to make sure our water is safe. Then there’s another side of the organization that always makes certain that our water and sewage stay separate. Then, the administrative team that supports that cast – everybody’s doing a great job.”

According to Meredith Hogg-Stone, President of HSA Engineers, Inc., the consulting engineers for Selma Waterworks, more than 72,000 feet of lines would be removed and replaced with a combination of copper pipes from the water main to the meter and PVC pipes from the meter to the structure.

“This project will take about two years to complete once construction begins, which is anticipated for later this year,” Hogg-Stone said. “We are currently in the environmental stage of this project. Part of this stage involves holding a public meeting to inform the citizens of Selma about this project.”

The public meeting will be held Aug. 18 at 5 p.m. in the George Evans Reception Center.

Hogg-Stone said the lines removed from the ground would be disposed of properly, but the homework hasn’t been done yet as far as the processes for properly disposing of those lines.

She added the water coming through those lines is safe and there’s no immediate danger to the public.

“The water department tests the water, and they have to send these results to ADEM,” Hogg-Stone said. “It goes through a strict testing process, specifically most of these lead service lines and they’ve all tested safe. We’re just being proactive about it. ADEM and the EPA have given a timeline of 15 years to get them all replaced, so we’re just trying to be proactive about it. Plus, we’ve got the funding to do it.”

Perkins called the impending project a “once-in-a-generation” investment and said the project represents success for the city.

“We all know that the infrastructure in this nation, not just in the lines, but also in our roads, bridges, rails – all of it, we need a lot of work,” he said. “This particular opportunity is one that we’ve identified. We do have some additional grant applications that are under consideration throughout the city and county, so we are looking forward to getting that next call.”