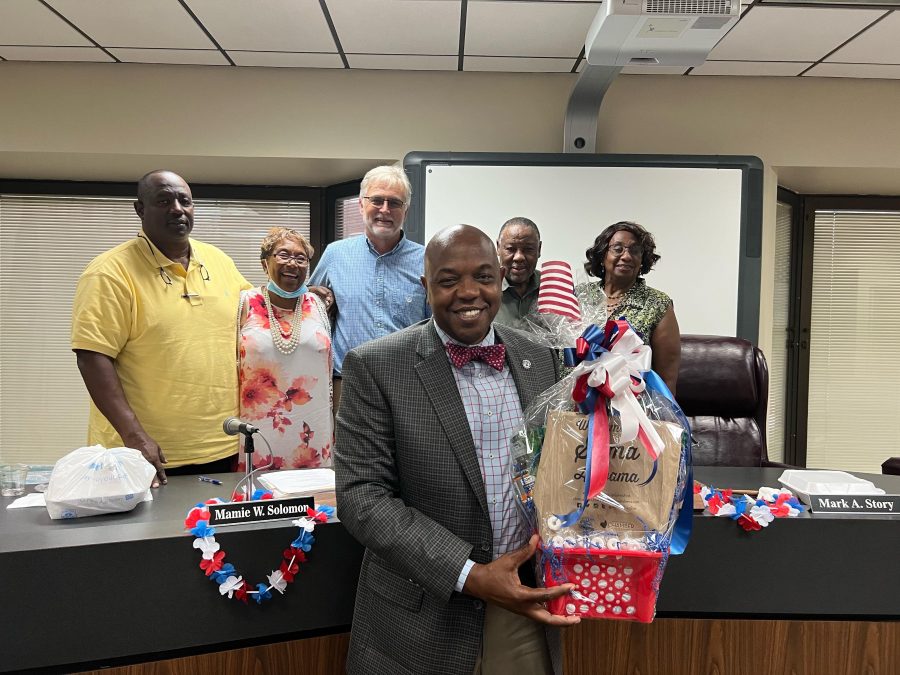 Board President Mark Story presented Shelton with a plaque honoring her 34 years of service, and District 5 Board Member Leroy Miles addressed Shelton in the opening moments of the meeting.

“Mrs. Shelton, I would like to say to you, thank you for all the hard work that you’ve done,” Miles said. “It’s been a joy working with you. In the 28 years I’ve been in education, I started off in Special Education with you here in Dallas County. You’ve done an outstanding job, and I appreciate everything you’ve done.”

Miles, who abstained during the process of hiring a new superintendent, lauded the board for its choice and officially welcomed Sampson into the mix. “You know, I wasn’t involved in it, Sampson,” he said. “I didn’t come to any meetings. I didn’t attend anything. And I think they did an outstanding job. I do want to commend you all … You all hired a great man.”

District 3 Board Member Mamie Solomon presented Sampson with a gift basket from the Selma Dallas County Chamber of Commerce, while Miles, during the business portion of the meeting, requested a revision to Sampson’s contract to add in a 4% raise granted at the state level for all school employees that wasn’t included in his offer.

“I want to make a recommendation to the Board that (the raise) is given back into his contract,” Miles said. “It’s not fair that he took the job here, and he don’t get recognized for his years of experience or even the 4% raise … I think we need to put it back in his contract. I’m asking the board – my recommendation is that we put whatever the staff receives here in Dallas County as a state raise, that the superintendent is entitled to it as well.”

Story agreed with Miles’ request, and after conferring with board attorney Malika Sanders-Fortier, Story made the motion to add Miles’ recommended revision to Sampson’s contract. The board unanimously approved the revision.

As the board was considering actions regarding personnel, Sampson asked that one of the transfer items be removed from the personnel addendum and said his justification for his request was the item that landed on the agenda was from a previous meeting.

“I can’t make a recommendation if I haven’t called a person, talked to a person, looked that person in the eye and vetted the person,” he said. “I’m not going to submit that to you. That’s not my recommendation. It’s something that’s a carry-over from the previous administration. For that reason, I’m asking you to remove it and give me time to continue to vet that item. I’ve done the research, and I understand the criticality of replacing that position.”

The board unanimously approved the remainder of the personnel actions and granted Sampson’s request.

More coverage from Thursday’s board meeting will be published in Tuesday’s edition.