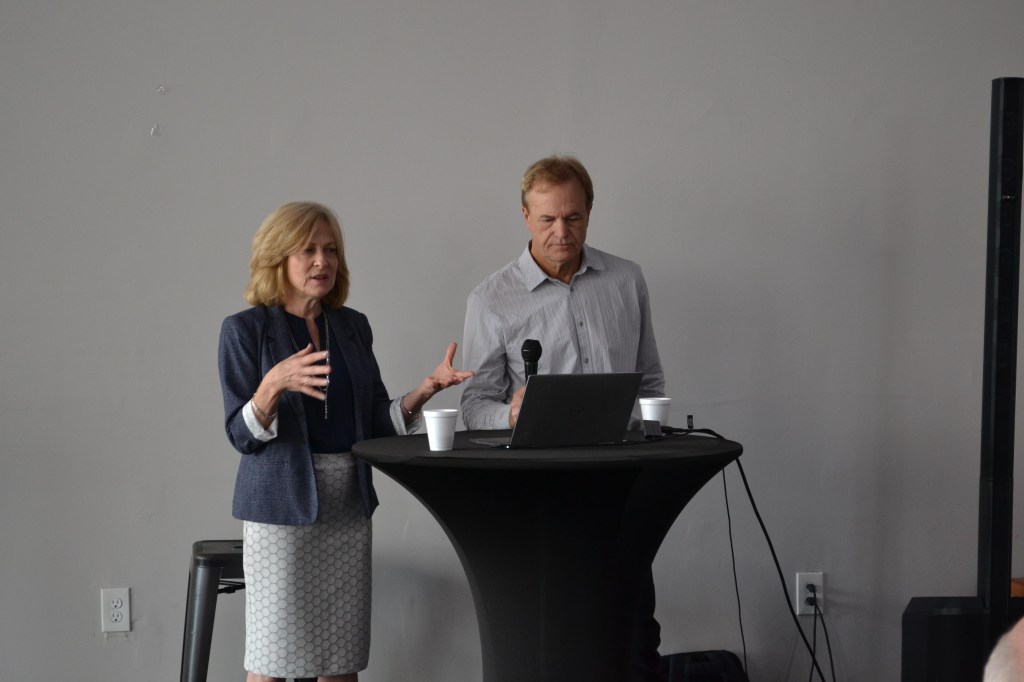 The Selma and Dallas County Chamber of Commerce and Tourism Information hosted a “60-Minute Coffee” event Thursday morning at The Anchor, located at 15 Franklin Street.

The duo provided updates on several development endeavors on Water Avenue in downtown Selma, announced the potential acquisition of African artifacts that would be housed in Selma and fielded questions from the audience pertaining to these projects.

Rhodes said the duo, based out of Tampa, Florida, fell in love with the Selma and saw the potential that exists in some of the older spaces, including the Harmony Club and Adler Furniture Company buildings.

“We want to see what we can do to bring some of that opportunity and some of that potential to reality,” Rhodes said.

She shared ideas of what they’d like to see done with the Harmony Club while showing slides featuring a model of what the restored building would look like.

Rhodes said their vision for the Harmony Club would be to bring in a restaurant for the street-level floor and create meeting spaces on the second floor of the building that could be used from anything to local organization meetings to weddings.

For the Adler Furniture Building, Rhodes said they would be restoring the balcony, of which they have 70% of the pieces of the original balcony. Cavalieri added the balcony may extend further than the original design.

Rhodes said the usage of the building would be dependent upon the end user, but for historic preservation purposes, they intend to retain the office and storefront areas of the building.

She said the top floor could potential be used by a restaurant seeking to have an upper-level space or more smaller units could be added to be used as micro-apartments or spaces for rent through AirBNB.

Cavalieri said they’re developing a marketing plan to try to attract potential businesses to those properties and other locations they seek to improve along Water Avenue.

“If you know people who are interested in opening something along Water Avenue, that would be a real positive for the city,” he said.

He added the discord between Selma Mayor James Perkins Jr. and the city council hinders the potential for growth.

“I’m going to say this even though it’s not politically correct, but the Selma city government has kind of a difficult reputation around the state, and that makes improving this area more difficult,” Cavalieri said. “If we can get some ‘Kumbaya’ between the city council and the mayor so that we can develop a good message to everyone else. I think that would be really important. If you talk to the city council (members) or the mayor, maybe encourage them so that they realize … the difficulty they’re making for Selma to be successful.”

Cavalieri said they’re working on another initiative, the Museum of African and Contemporary Arts Selma (MACAS).

“We’ve identified a number of primitive African artifacts from a tribal leader from Mali who brought them over to America six years ago because he was worried Al-Queda would come in and ruin his collection,” Cavalieri said. “We’ve got a line on that, and we’re trying to fundraise. He wants to bring that to Selma, so he’s working with us.”

He added if they can acquire the collection to Selma and start a museum, it would give tourists, artists and others another reason to come to Selma and stay longer than it would take to see the bridge and National Voting Rights Museum.

“We’d like them to spend a couple nights here and a couple days here because there’s a lot of things to look at in Selma,” he said. “I know I’m preaching to the choir here, but if we can just take advantage of those, I think it would be really good for Selma.”