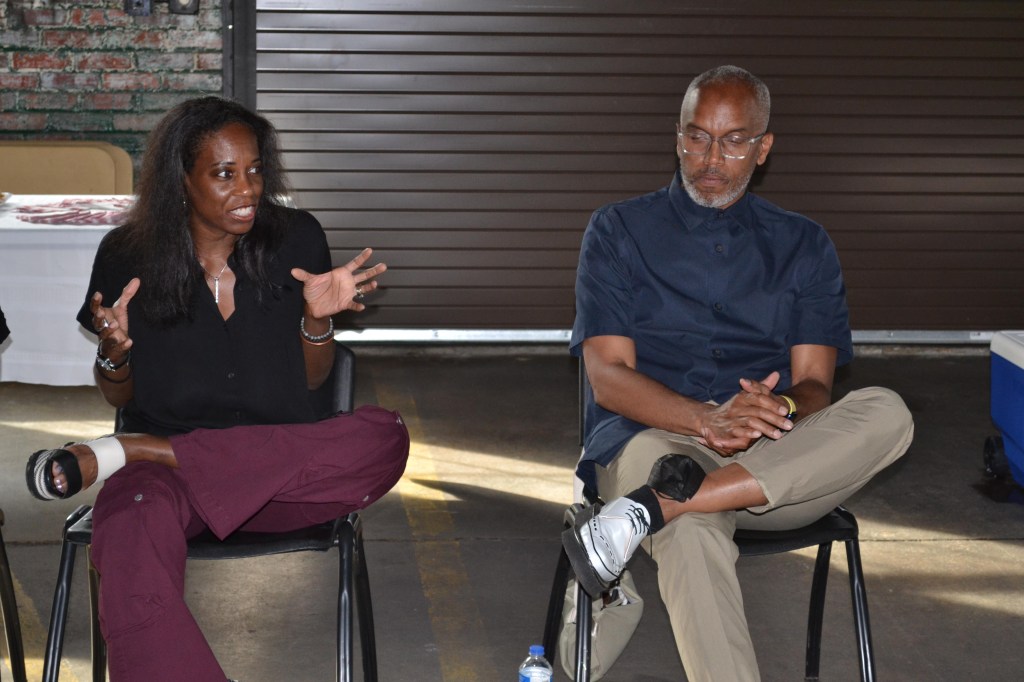 Wideman Davis Dance hosted a meet and greet event Tuesday evening with members of the community at ArtsRevive to exchange dialogue and receive input for their upcoming four-month residency in Selma.

The residency, which runs through October, will feature weeklong visits with movement classes and community discussions, all building toward an immersive dance performance entitled “Migratuse Reimagined,” a follow-up to one of their previous works, “Migratuse Ataraxia,” which was performed in Harpersville.

The classes, conversations and performances will be free and open to the public.

The group also discussed potential sites where to hold the performance as they desire to incorporate local architecture into the performance. The Washington Street area and the Good Samaritan hospital are among some of the spaces under for consideration.

Wideman-Davis said the objective is “taking spaces that look pretty much dilapidated and unvalued, and putting value into these spaces.”

Community members received a small demonstration of what they might learn during a movement class as Davis led them through a series of exercises intended to loosen up the group.

“Some people may have this perspective that it always has been hell and there’s a traumatic narrative around Selma,” she said. “But we want to hear those other narratives around Selma so it doesn’t become, ‘OK, Selma is just really situated and people (are) profiting off the trauma of these particular events in time,’ because there’s so much richness here. I knew that by having conversations, we could fold some of those pleasure moments into the performances.

“I’m just looking at the people here, and I’m so intrigued by the faces and bodies. Is there some way we could project these people onto the buildings and just show that these are surviving individuals? These are beautiful people who are here.”

Joanne Bland, owner/operator of Journeys for the Soul, said she could remember times of prosperity from her childhood in the face of the adversity Black people endured during those times and noted progress has been made throughout the years.

“But usually, when it comes to the race talk, we never have an honest race talk because people think we’re accusing them. Now, I’m not accusing them. I’m just stating facts, and I hope we accept … the fact that it happened, and we’ve got to make sure it doesn’t happen again.”

Joyce O’Neal, tour group director for Brown Chapel A.M.E. Church, said she attended the performance of “Migratuse Ataraxia” and was moved by the work of Wideman Davis Dance.

“I think this project would be something that Selma needs,” O’Neal said of the dance company’s latest venture. “I think it has the potential to uplift Selma in a positive way and not just a lot of the negativism that surrounds the Voting Rights Movement and the impression people get from the Voting Rights Movement. There’s still another part of Selma, another aspect of Selma and people in Selma doing something different that’s very positive.”

Local artist A.C. Reeves said she can see the positives in what the project could bring to Selma.

“I mean, just to get us moving, it’s just wonderful,” she said. “I think it’s incredible, and I’m so grateful that, first off, they’re coming to be a part of our community and not just parachute in like they said other people do. It’s going to be an exciting thing.”