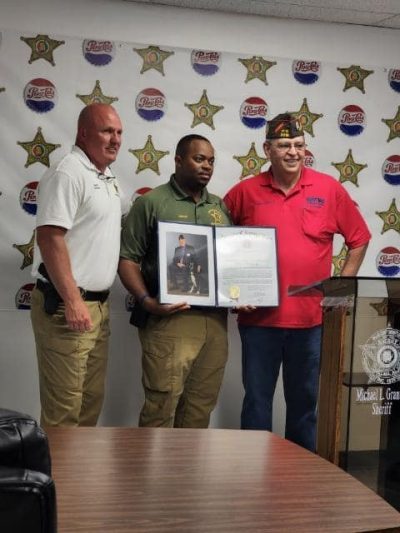 Dallas County Sheriff Mike Granthum praised Calhoun for her his leadership and dedication.

“I am very appreciative to work with him each and every day,” Granthum said. “I hope people realize how big of a deal this is. I have never seen anyone receive this award.

“I want everyone to know that he beat out every officer in the state. Now that is a big deal. Not only are he’s a good officer he’s a great person.”

Calhoun, a Sgt. in Criminal Investgations at the DCSO, said winning the award is a major deal to him.

Kilponen, Doherty and Stone all said that Calhoun deserved to win the honor. The VFW hosts an awards ceremony each year, honoring Law Enforcement, First Responders, Teachers, students and media.

“The award is a great honor for Calhoun and the Dallas County Sheriff’s Office,” Kilponen said.

Stone and Doherty said its rare that a DCSO officer is named the top state and national officer of the year at the same time.