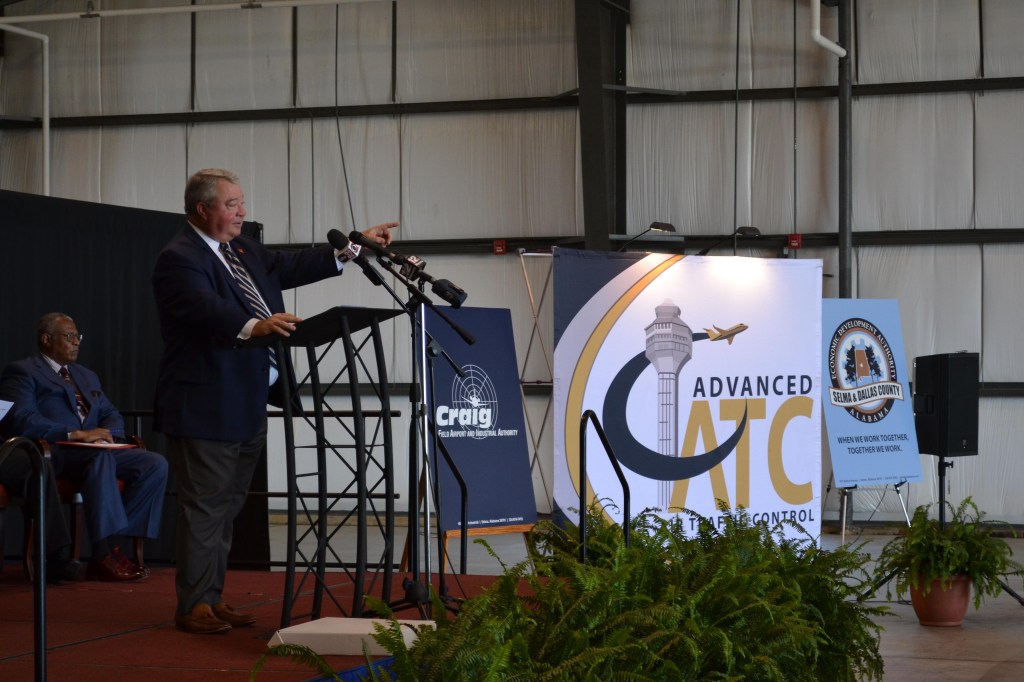 Advanced ATC Inc., an air traffic control academy based in Valdosta, Ga., announced at a press conference held at Craig Field Thursday their plans to invest approximately $4.7 million to establish the Remote Tower Air Traffic Control Center, the first-ever in the U.S. along with an international air traffic control training academy, the first of its kind in the world.

Growing in popularity in Europe, the recent technological advancement uses camera, real-time video and other features that enables air traffic controllers to remotely accomplish the duties they would normally carry out in a traditional control tower.

“Remote towers represent an important and innovative step in airspace modernization efforts in the U.S., and I’m excited to see Advanced ATC establish its pioneering operation at Craig Field,” said Greg Canfield, Secretary of the Alabama Department of Commerce. “This virtual tower represents another example of how our state is at the leading edge of trends shaping the future of aviation and aerospace for the U.S.”

Canfield added he and his colleagues who work for the state Department of Commerce believe rural Alabama is capable of punching above its weight class when it comes to bringing in new companies.

“What I mean by that is you can attract cutting-edge companies that are bringing in leading technology, that are innovating and disrupting industry sectors,” he said. “We believe disruption creates opportunity, and that’s what we have here with Advanced ATC today.

“That the remote tower configuration and the digital technology to be able to run air traffic control from a remote tower anywhere in the world, but to be able to do it here in Selma, Alabama, is a great testament to the local leadership and the collaboration that had to take place to bring all of this together. I really think this particular project is going to put Craig Field back on the map and will be a draw for other activity into the future.”

According to Advanced ATC officials, the remote tower in Selma will be equipped to support aviation expansion and provide air traffic control services for up to 40 airports in the U.S.

“The outlook for small airports to be able to afford ATC service without the requirement to build a $5-10 million control tower is now available with the advancement of camera and satellite technologies changing almost daily,” said Dan Cunningham, Chief Operating Officer for Advanced ATC. “The Selma RTC will be the catalyst for this historic change in the United States.”

“After several years of working with the Craig Field Airport Authority and the Selma & Dallas County Economic Development Authority, we are thankful for them being able to promote this project with the Alabama Department of Commerce and Governor Kay Ivey,” said Monica Cunningham, President of Advanced ATC. “We are thrilled to reach a win-win agreement and are very anxious to get started making aviation history at Craig Field.”

“(Executive Director of the Craig Field Airport & Industrial Authority) Jim Corrigan   and I have been working on this project since I first brought it to him and have very high expectations on how it can attract future aviation to Craig Field,” Vardaman said.

Corrigan welcomed the companies and their technological capabilities to Selma.

“Craig Field is proud to host Advanced ATC, Indra Corp., and this cutting-edge technology,” Corrigan said. “This capability will provide controlled airspace and open the doors to future aviation development at this historic location.”

Dallas County Probate Judge and County Commission Chairman Jimmy Nunn and the Dallas County Commission played a vital role in helping Craig Field regain control of several buildings Alabama Law Enforcement Agency had used for a police academy. The buildings will be rehabilitated and used by Advanced ATC to house training academy students and for their corporate offices.

“Once again, Selma is on the cutting edge of something that is truly great,” Perkins said.