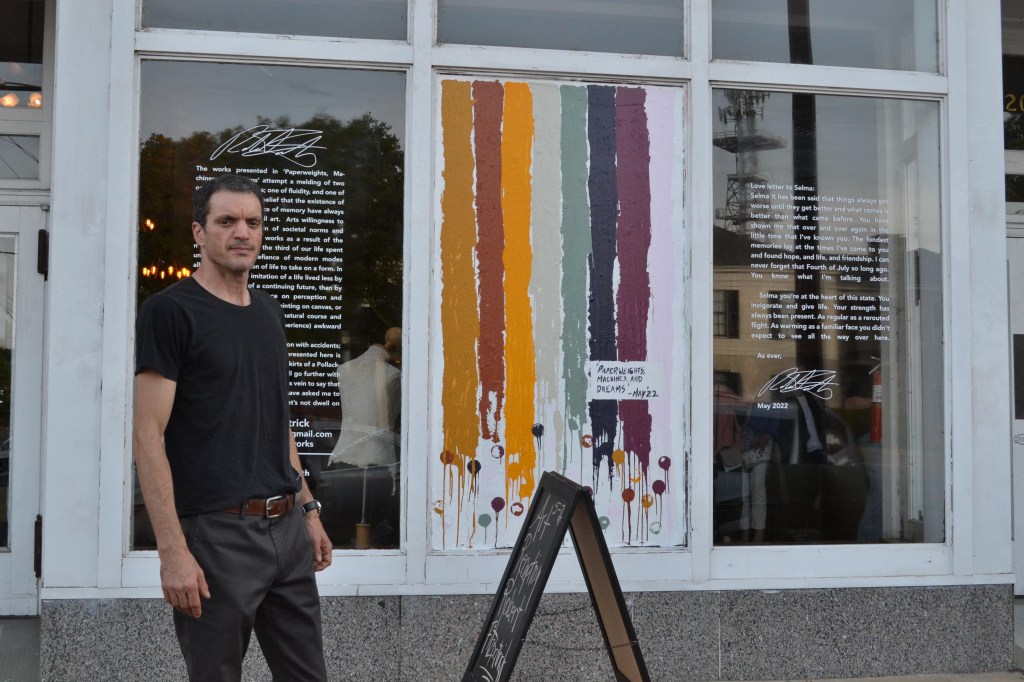 Robert Fitzpatrick, an artist from Greensboro, showcased his work at the 5&Dime, an ongoing art installation project spearheaded by local artist A.C. Reeves, on May 19.

Fitzpatrick wrote a love letter to Selma on the right pane of glass near the entrance of the building and painted his own design in the center pane. He is the 10th artist to be featured in this project.

“I come down here for the third Thursdays quite a bit,” he said. “I try to support what A.C. is doing and the art scene and community in Selma. A.C. asked me to do an installation, and I was really happy about that. I had really done nothing that would make her believe I would do something like that, but she gave me the opportunity and I really enjoyed that.”

Some of Fitzpatrick’s work included paperweights, paintings and a variety of “dream machines,” devices he said were originally created by artists in 1961.

“It was a combination of conceptual art with relaxation, mathematics and the usage of light casting shadows onto your eyelids,” Fitzpatrick said. “You’re supposed to look at this machine with your eyes closed so the passing light through the openings and the reverse side creates a chatter effect, and at a certain rotational frequency, it immediately simulations alpha waves in the brain and causes relaxation. It sort of relaxes the optic nerve and it manipulates your brain into feeling alpha waves.”

Fitzpatrick said the original device consists of a turntable set to 45 revolutions per minute with shades created by Ian Sommerville, an electronics technician and computer programmer associated with William S. Burroughs.

He added the machine can cause epileptic seizures and issues for people who have light sensitivity.

“If you have a light sensitivity, playing with this machine or using it won’t do its intended purpose,” Fitzpatrick said. “It will make you feel unwell.”

“The canvas is all cardboard, but it’s all dripped painting,” he said. “It’s not splatter work. It’s though about. There’s an open concept – an idea of a landscape and color, and that’s about it. The rest is just trying to manipulate and control the paint so that it can create a form instead of running all over the place.

“It’s a tightrope walk. Sometimes it works, sometimes it doesn’t and sometimes the paint moves closer than you had anticipated. Two days later, it could look completely different than what you intended. That could be good or bad.”

Some of Fitzpatrick’s work features repurposed materials – notably wood from old buildings in Greensboro and barns.

“There were some barn beams that I cut up,” he said. “The paperweights are made from those mainly. The wood on the wind chimes, the wood used there was reclaimed from old Victorian homes in the Black Belt region. The chimes are made from galvanized conduit pipe. It’s all pretty much reclaimed materials.”

Hi-tech jobs for Dallas County to be announced Thursday