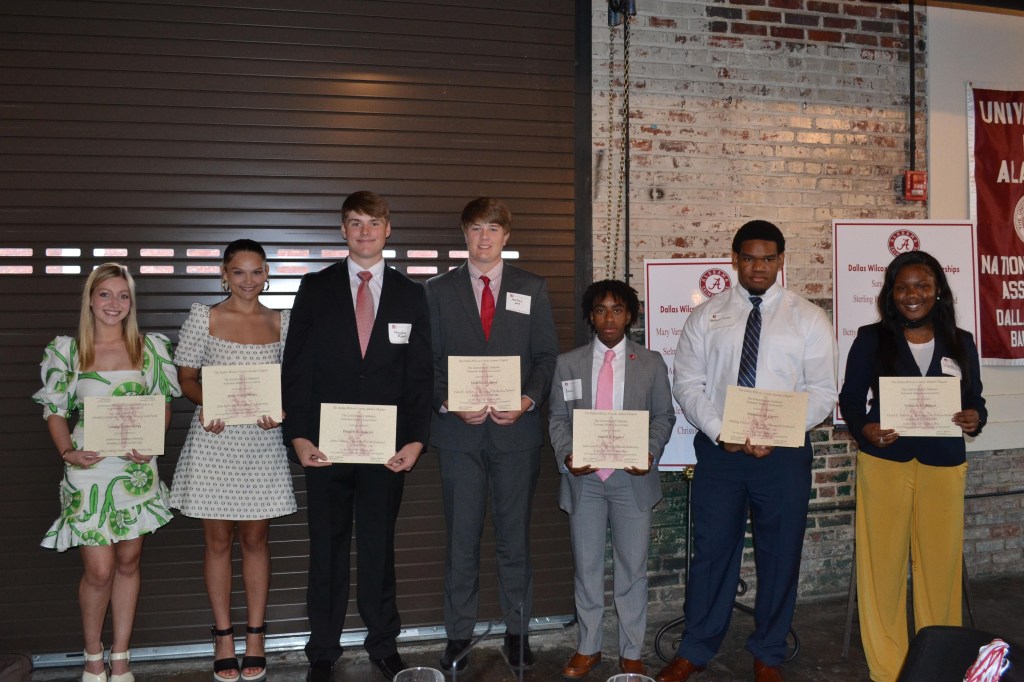 “Our primary responsibility as a membership-based club is to provide financial assistance to qualifying high school seniors from Dallas, Wilcox and surrounding counties, who plan to attend the University of Alabama,” said Ronnie Leet, Club President. “Our second responsibility is to promote fun and excitement about Alabama academics and athletics.”

Each student received their scholarship funds from the following sources:

The scholarship winners and club members in attendance heard a presentation from guest speaker Johnathan King, Director of Football Graphics for Alabama. King’s career began in Alabama, then took a four-year detail into Volunteer territory in Knoxville, Tennessee before he was asked by Alabama head coach Nick Saban to come work in his current role.

“I told people, ‘Look, I may not be able to cheer for Alabama anymore, but I can always hate Auburn,”” King said of his time at the University of Tennessee.

King showcased examples of his work, including recruiting video, NFL Draft graphics and video packages for selected Crimson Tide players and segments from the hit web series that began as “Shop Talk,” but was later repackaged as “Bama Cuts” after a lawsuit by LeBron James led to the school changing the name.

“The lawsuit put the name in the headlines nationwide, so everybody was watching,” King said. “That first season, we had people calling us, former players like Derrick Henry, guys like that who wanted to do a barber shop episode with us. It built itself up.”

King lamented losing the one potential guest that got away, the late Los Angeles Lakers great Kobe Bryant.

“He was in the chair,” King said. “I had put the mic on him, and his agent called and was like, ‘LeBron James just signed last week. We cannot be in the barbershop chair.’”

Another area King said he helps the Crimson Tide is in the ever-evolving world of Name, Images and Likenesses and shows the players how they can capitalize on the opportunities created by relaxed NCAA rules regarding the matter.

“The Alabama brand is the biggest brand in college football – there’s no question about it,” King said. “So when these recruits come in, we’re able to quantify that and say, ‘Look at the viewers we’ve got. We’re No. 1 on all platforms in social media numbers.’ We give them these numbers and say, ‘Look, more people are going to be seeing you every single week if you do something like this, and if you go anywhere else, it’s not even close.’”