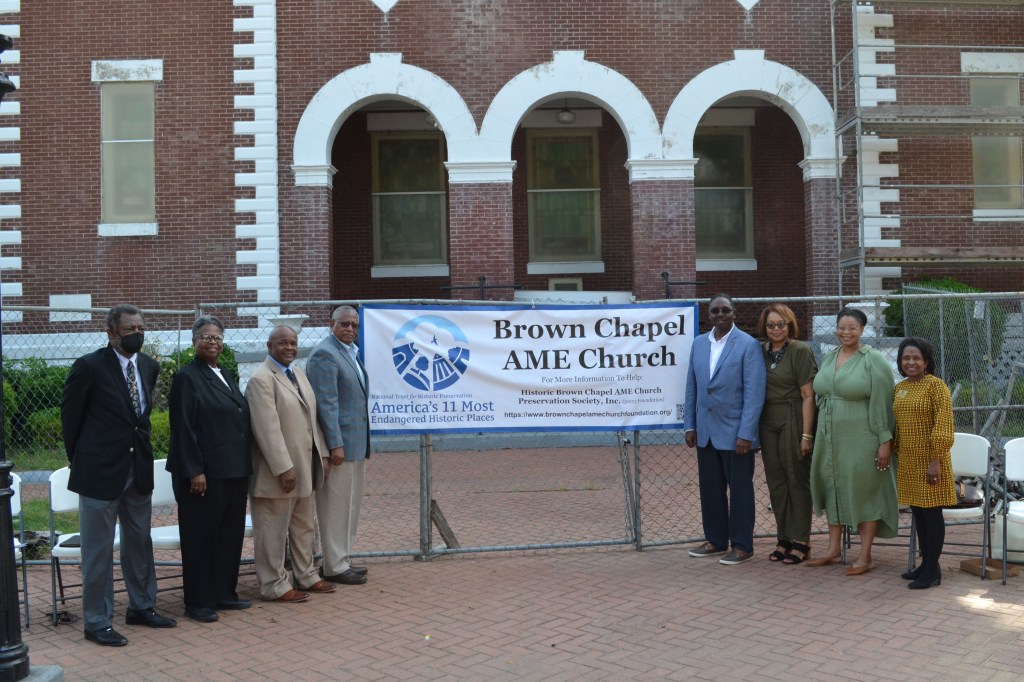 The Historic Brown Chapel A.M.E. Church Preservation Society held a press conference Thursday morning in front of the church to discuss its addition to the National Trust for Historic Preservation’s list of America’s 1 Most Endangered Historic Places for 2022.

Juanda Maxwell, Project Director and Fundraising Chairman for the society, said the church’s addition to the list will help bring awareness about the current condition of an important landmark from the Civil Rights Movement.

“We are grateful for this recognition of our efforts to preserve Brown Chapel A.M.E. Church by the National Trust,” she said. “Since 2009, the Preservation Society has worked to preserve the beauty and architectural significant of Brown Chapel A.M.E. for our members, the state of Alabama and the nation. While we have experienced setbacks, we never wavered in our commitment and are encouraged that through listing on 11 Most Endangered and with support from our partners, Brown Chapel will remain an iconic landmark for many years to come.”

Maxwell said the society broke ground on a $1.3 million rehabilitation project funded by the National Park Service African American Civil Rights grant in June, but four months into the repair and restoration efforts, contractors with Lathan & Associates discovered significant termite and water damage to the wooden beams supporting the balconies, bell towers and many other sections of the church.

“The monies that we thought were sufficient was not sufficient,” Maxwell said. “The foundation has applied for an additional $1 million in grants for 2022. We plan to apply for even more in 2023. However, we will need approximately over $4 million to repair and restore the church. We need your help. Please help the foundation.”

In 1908, formerly enslaved Black builder A.J. Farley constructed the church, which served as a sanctuary and base of operations for civil rights activists and church members planning protests in their efforts to secure voting rights for African Americans. The church holds significance in a key historical moment in the fight for voting rights as the starting location for a protest march on March 7, 1965 that ended at the Edmund Pettus Bridge when Alabama State Troopers assaulted marchers attempting the cross the bridge – an event known as “Bloody Sunday.”

Selma Mayor James Perkins Jr. said he was 12 years old when the events of Bloody Sunday took place and though his parents didn’t allow him to participate in the march, he snuck away to the church and saw the aftermath of what took place on that fateful Sunday.

“I was here as the marchers were returning,” he said. “I witnessed firsthand adults with tear gas in their hair and in their eyes, people crying and weeping who were in shock of what had taken place. Those memories are etched in my mind being at Brown Chapel on March 7, 1965. I say that because we’re not just celebrating a building …  This is really about the history in this community. It’s about the people of this community. It’s about the movement that is still a movement today. I just want to remind us that preserving this beautiful edifice is like placing one of the 12 stones by the Jordan.”

“I heard Mrs. Maxwell say it was going to cost over $4 million in funding for the renovations,” he said. “That’s not a small piece of change. That’s a lot of money. It’s going to take a lot of effort on everybody’s part to pitch in to restore and to preserve this historical place.”