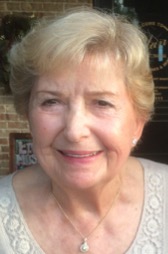 It is with great sadness that we mourn the passing of our dearly loved mother, Dorothy L. White of Gulf Shores, who died  April 15, 2022, in a Pensacola hospital.  Born in 1930 in the Hand-Bailey Hospital in Demopolis, and raised in Plantersville, she was the daughter of Rufus D. and Mamie Lambert Harvill.  She was preceded in death by her parents and her brothers, Marion E. Randall and Henry W. Randall.

Professing faith at an early age, Dorothy was baptized at Mt. Pleasant Presbyterian Church alongside her mother and brothers.  She was as intelligent as she was beautiful and school work came easily to her.  She graduated in 1947 from Albert G. Parrish High School in Selma at the age of 16.  Marriages, children and living the traveling life of a military wife occupied the next 2 decades.  When asked, she said that the happiest times in her life were while raising her 4 children and while working in the admissions office at Troy State University in Montgomery and for the State of Alabama, Administrative Office of the Courts.

After almost 25 years in Montgomery, she retired to Gulf Shores where she enjoyed many more years walking the beaches with her dogs that she loved so very much.

Surviving family include her daughters, Rhonda Eubanks of Pensacola, Pamela Hagan of Creston, NC, Susan Thorn and husband, Randy, of Montgomery, and son, John E. White, II, of Pensacola,  grandsons Alan Eubanks, Robert Eubanks and David Bradford; great-grandchildren Jacob, Kaitlyn, Lilly and Isabella Eubanks, and last but certainly not least, her furry child and constant companion, Daisy Belle. As she requested, a private family service and interment was held in Pensacola at Bayview Memorial Park, Chapel of Peace. We would be honored if you chose to remember Mom with a gift to the Montgomery Humane Society, 1150 John Overton Drive, Montgomery, AL 36110 or the animal shelter of your choice.