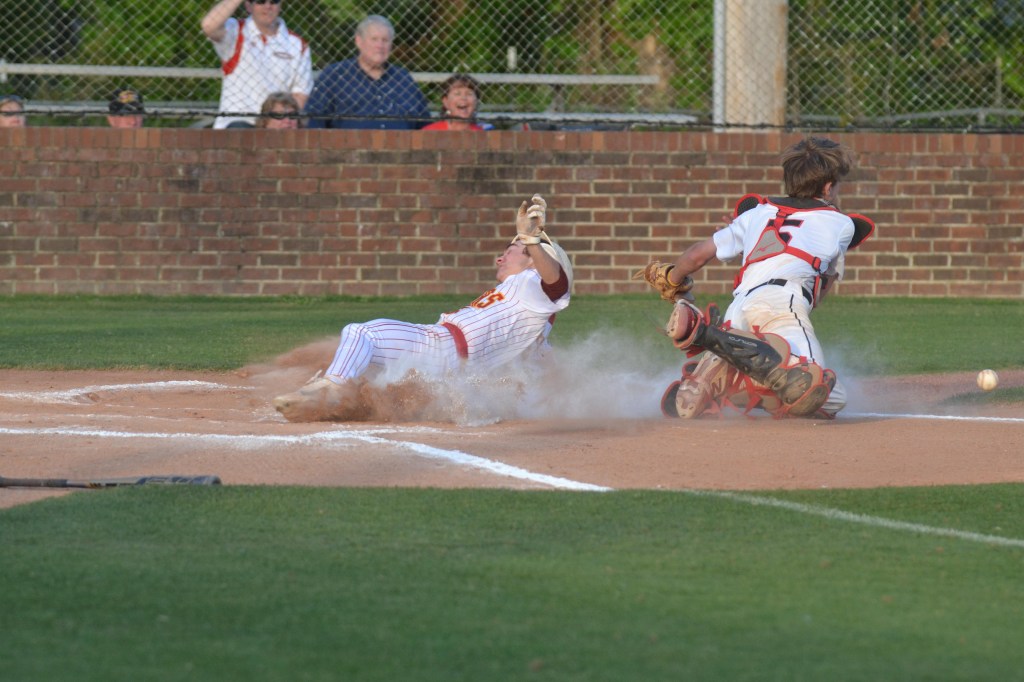 The Senators breezed through the opener with a 9-1 victory, then rode a 9-run surge through the top of the fifth inning in the nightcap to claim a 13-3 win.

“I didn’t start off too good this game and I was kind of popping out, so I just had to do something good for the team,” Vardaman said. “So I just tried my best to get the bunt down, and it worked out.”

“I think we scored about nine before they made the first out,” said Stephen Clements, Morgan Academy head coach. “We just started hitting it. They walked a couple here and there, but we just started hitting gaps. Everybody going to the plate was just kind of staying to the middle and just doing a good job of attacking the baseball and getting some big hits. It just kept rolling, pass it to the next guy and pass it to the next guy. Before you know it, it’s a 9-spot on the board.”

Plank walked Matthew Hand and Cade Henderson to load the bases, then what should have been a double by C.J. Crocker turned into a base-clearing play for the Senators due to a throwing error to second base.

“C.J. actually made a base running mistake on the play because I’m sitting here just jumping up and down trying to hold him at second because the ball’s coming in and we’ve held our other runner,” Clements said. “He runs up on us, so now we get in a bind, and they try to throw back and get C.J. at second, and the ball kicks away, and he ends up with an in-the-park home run off a mistake. That’s just fortunate, but that’s hustle.”

Crocker’s at-bat, a deep shot to left center that sailed just past the Wildcat fielder’s glove and into the wall, resulted in an unofficial inside-the-park grand slam.

“I was trying to hit a nuke, and it went off the wall,” Crocker said. “I was trying to get a triple off it, and then I guess he didn’t pick it up, so I went back to second. Then, they made a bad throw, so I knew I was going to score off that because center field was just way back there. It just worked out. It gave us the lead to run-rule (them) and I was just glad to do it for the team.”

Ingram’s second double of the inning scored T.B. Clements, who had stolen his way to third after being walked by Plank, to put Morgan Academy ahead 13-2.

Vardaman closed the game at pitcher, allowing zero hits and one run while striking out two and walking three.

“He (Coach Clements) told me I was probably going in to pitch later, maybe,” Vardaman said. “I just wanted to do whatever I could for the team to get the win, and I did that pretty good, I believe. I’m just happy for the team.”

Hayden Roberts started on the mound for the Senators in Game 2, allowing three hits and two runs in four innings while striking out five batters and walking four.

Clements said Roberts, who has been struggling with shoulder issues, had some trouble with his off-speed pitches, but his will to fight kept his team in good position.

“He didn’t have his good stuff, but he just kept battling,” Clements said. “I shook his hand, and I said, ‘Son, I’m proud of you.’ Sometimes, you’ve got to win when it’s not your best, and he did that tonight.”

Crocker scored the opening run for the Morgan Academy in the top of the first on a sacrifice fly by Thomas.

Springwood responded to tie the game 1-all with a Luke Hudson single off the left field wall to score Plank.

Hand put his team back in front in the second stanza with a single to bring home Lightfoot. The first baseman stole second and third base, to the delight of his teammates in the dugout, and was allowed to come home after a balk by Plank.

In the third, Ingram crushed a double to send Thomas home and make the score 4-1.

Springwood’s second run came from Colt Pearson in the bottom of the fourth after Ben Cooper reached first on error.

In the opener, Thomas pitched seven innings. He struck out 10 Wildcats while allowing one run on six hits.

Clements went 2-for-4 at the plate and led the Senators with three stolen bases.

Morgan Academy will travel to Glenwood School in Phenix City for its third-round series with the Gators at 3:30 p.m. on Thursday.