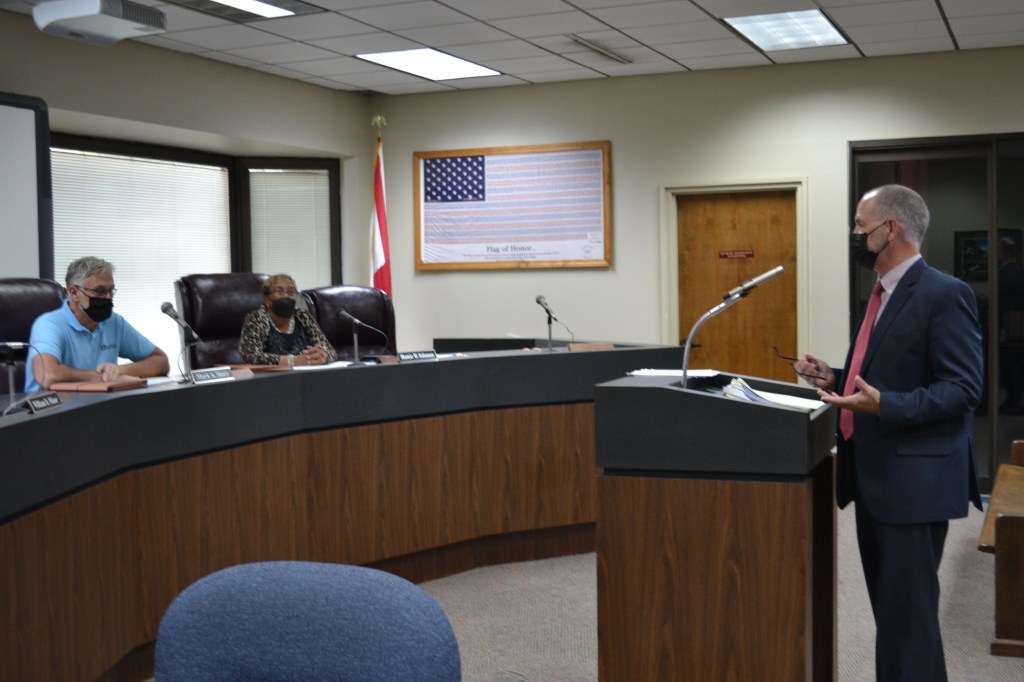 The Dallas County Board of Education narrowed its search for a new superintendent to five finalists during a called board meeting held Tuesday evening in the Dallas County Courthouse Commissioners Chamber.

Dr. Michael Barber, an educational consultant with the Alabama Association of School Boards (AASB), announced the finalists chosen from a pool of 17 candidates who submitted all required paperwork and information to apply.

Barber presented each board member with a comprehensive packet of information about each finalist and informed the board each finalist had been vetted by the AASB.

“I’ve been traveling around the county and taking a look around,” Barber said. “Someone is going to be very fortunate to get to come here, work and get to work with this board. As I’ve talked and spoken with candidates, that was one of the biggest questions.

“They always like to ask about the board, and I said this is one of the most delightful boards. They get along, they work well together and their desire truly is to find the next leader of the Dallas County School System.”

Barber gave a brief overview each finalist to the board and highlighted what parts of their educational experience grabbed the attention of AASB during the process.

Bush served a principal at both the elementary and middle school level, worked in the central office and presented as a speaker at a number of national educational conferences.

“When you look at Dr. Bush, she’s one of those who has this vast experience at the central office level but had the heart to go back and really make a difference at the schools in Jefferson County as well,” Barber said.

“In calling her references, there was nothing moving her back and forth other than her desire to make a difference and to really apply all the research she has been doing. She is sought after to go and speak about the successes she has had.”

A 23-year veteran in education, Madden implemented and managed the A+ AP Placement Program at Fayette County.

Barber said under Madden’s leadership, Fayette County earned recognition from U.S. News as one of the top 25 high schools in Alabama.

“We spoke about workforce development,” Barber said. “That has been his focus while at Fayette County, Career Tech, workforce development and really bringing in certification so kids can leave school and go to work … Scholarship offers have definitely increased while he’s been there and opportunities for the future of the kids.”

Miles spent her entire 27-year career in Dallas County working as a teacher, principal and in the central office. She also serves on the Selma City School Board as the District 4 Board Member.

During her time as principal, her school was recognized as a Torchbearer School, an award given to schools performing at a high level despite being in an area of high poverty.

“Normally, you don’t talk about high poverty and high performing together,” Barber said. “To be a Torchbearer School, at least 80% of your students have to qualify for free or reduced meals … 80% of your students have to pass standardized testing in reading and math tests. The kick to that, being a Torchbearer School, is the next year, you have to have more students scoring in Level 4, which is the highest level, than you had in the previous year.

“Anyone who’s done testing knows that it’s easier to bring someone who’s way down here up to right here, but when you get to that top tier, it’s harder to move that group on up. To be a Torchbearer School is a big thing. They are school that don’t make excuses for why children can’t achieve, they have high goals and they put in the extra time and effort with limited financial resources. Basically, they do whatever it takes to make the kids successful.”

“One of the things that impressed us about Robinson is that he is very hands-on,” Barber said. “Some of his presentations are still on YouTube from a few years back if you want to pull them up. There’s a great deal of effort in connecting with the community and building a community … His packet is probably the most extensive packets that you’re going to read.”

Sampson spent his entire 23-year education career in Baldwin County and earned the rank of Colonel while serving in the U.S. Army Reserves for 30 years.

Barber noted some of Madden’s career highlights in Baldwin County.

“His experiences include serving as a member of the superintendent’s executive cabinet,” Barber said. “He maintains oversight of Prevention and Support Services … He’s developed budgets for staffing for 45 schools, developed strategic planning guidelines and five-year financing recovery plan.”

Barber also gave the board advice on how to schedule interviews for the finalists and gave them a listed of questions not to ask the candidates.

Board President Mark Story said this was the first time he’s aware of the board had used AASB to consult on the hiring of a new superintendent.

“We’ve always usually done it in-house,” he said. “We just chose to do it a little different route this time to see because we’ve heard good things from other school systems that used AASB consulting services. We were excited to get that opportunity to do that …

“This is the best applicant pool we’ve had ever. We got down to five really top-notch candidates, and we’re looking forward to going forward with it.”

Story said the board will review each packet and set up a future work session and interviews with candidates in the coming weeks.