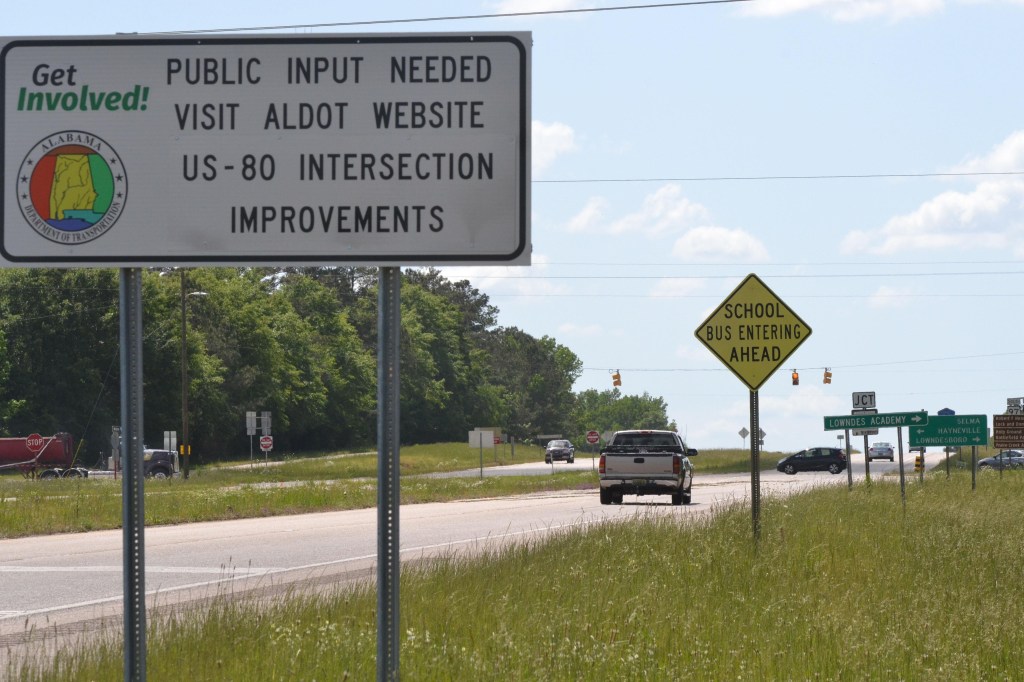 A proposed solution to resolve problems at a dangerous intersection in Lowndes County serving Lowndesboro and Hayneville appears to have stoked discontent between some local officials and the Alabama Department of Transportation (ALDOT).

The ALDOT plan seeks to have residents from Lowndesboro who need to travel east on U.S. Highway 80 turn right off Alabama Highway 97 towards Selma, then perform a “J-turn” instead of making a left turn at the intersection. The inverse applies to residents of Hayneville seeking to go westbound on Selma, as they would have to turn east towards Montgomery and make a similar turn.

Lowndesboro Mayor Anne Spooner said there has been a considerable amount of disagreement from her residents regarding how ALDOT wants to proceed and the issue has become a “bone of contention” for the rural community.

“We had the public hearing, and yet, they seem to have already made up their mind about what they want to do even though they have given us until May 1 to send in written comments and questions,” she said. “I don’t know if they’re going to change their mind or not, or how they really handle this.”

She added travelers speeding on Highway 80 make the intersection dangerous, especially those traveling eastbound who must crest a hill less than a quarter-mile from the intersection.

“The residents of Lowndesboro basically feel like we’re carrying the burden for the speeders on Highway 80,” she said. “It doesn’t do anything to the people who are speeding on Highway 80, but it does put the burden of safety on people in Lowndesboro.”

Another area of concern for Spooner centers on how the proposal will impact residents who are in the business of agriculture.

“I represent the people who live here, the farmers, the people who have the chicken houses,” she said. “There’s a lot of farm equipment here, and we just can’t do those kinds of turns. That equipment can’t make those turns like that, according to the farmers.”

Spooner said the general consensus within her community is for ALDOT to install a traffic light in order to prevent accidents at the intersection and noted ALDOT’s plan could exacerbate the problem.

“Instead of having all the accidents in that one location, they’re moving it to two locations because the people on 80 are still going to be speeding when you’re trying to make a U-turn,” she said.

Brantley Kirk, spokesperson for ALDOT, said the purpose of the proposed project to restrict median crossing at the intersection is to improve safety and traffic operations.

“The proposed plan is designed to handle all types of vehicles and was presented to the public on Thursday, April 21; ALDOT is reviewing comments received,” she said. “The intersection of U.S. Highway 80 and Alabama Highway 97 does not meet the federal guidelines for a traffic signal.”

Lowndes County District 5 Commissioner Dickson Farrior said the state would make a decision regarding how to proceed, but no one has contacted the county regarding the proposed plan.

“The people that I have heard from in Lowndes do not like what they are proposing,” Farrior said. “They think it will make the intersection more dangerous. The people have suggested bigger lights and better markings. The intersection and road is not marked well at all.

“We haul cattle and hay through that intersection and I don’t see how what they are proposing is going to work. One proposal the state suggested was closing down the service road.

We have three businesses on the service road and that would not be good for them. We need to have more thought put into it.”

Billy McCurdy, who farms cattle at McCurdy Farms, said the blind spot created by the hill to the west of the intersection puts another group of residents at risk from ALDOT’s proposal.

“I think it’s going to be dangerous for the kids coming from Lowndes Academy because all of them are going to have to come up the road and then cross over,” he said. “Where they’ve got the crossover coming on the west end of it, you can’t see over the hill.”

McCurdy himself has experienced the dangers of the intersection.

He said he also would prefer a traffic light in lieu of the current ALDOT proposal.

“I’ll have to tell you one thing, if we have a traffic light, I’ll sit there and cuss it when there is  nothing coming,” he said. “If that’s what it is, I’ll do the traffic light. What I told them they need to do is put signs on 97 in Lowndesboro to make sure people are careful.”

The proposed plan mirrors a similar plan implemented at a problem intersection in Centreville. Mike Oakley, Centreville Mayor, attended the April 21 public hearing in Lowndesboro to explain how the J-turns helped resolve issues within his community.

“Our main goal was to make everything safer and the J-turns that were installed have done that,” he said. “They have made the intersection much safer and there have been no major accidents or death since they have been installed. I can understand the frustration that the Lowndes County people are having when you are talking about an intersection that is dangerous and people dying.

“We have had our new intersection for about two years and service trucks, big trucks and tractors have no hesitation in using it, no problems. It took a little bit for people to get used to it but now it is second nature.”

A number of people in Lowndes County do not see the Lowndesboro intersection as a comparable to that in Centreville. The Lowndesboro hill on the east bound lane is believed to be far more of a problem than Centreville has, and some wonder if Lowndes agricultural traffic counts cause it to top those in Centreville.

Attempts to reach Hayneville Mayor Jimmy Davis for comment on the proposal were unsuccessful. But there will be additional news stories for which we hope to hear from him and other elected officials.