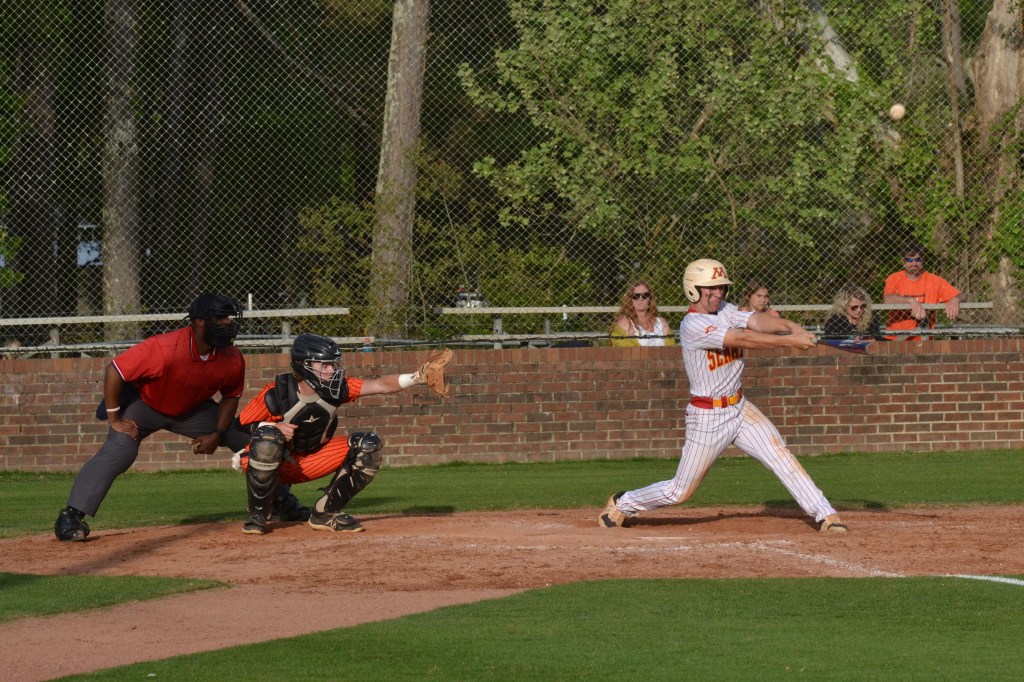 With 6-1 win over the Gators on Thursday, the Senators needed just one victory to secure the title. In an opener that spanned extra innings, a walk-off single by T.B. Clements in the bottom of the ninth brought home Cade Henderson for the winning run in a 7-6 victory.

“We just kept battling,” said Stephen Clements, Morgan Academy head baseball coach. “Cade, a ninth-grader, comes up and draws one-out walk. He’s able to move to second on an overthrow trying to pick him off, trying to make something happen again. Then T.B. coming through – that’s clutch. That’s a huge hit to win the area championship and get us a first-round bye. I’m as proud of this bunch right here as I’ve ever been of any team I’ve ever coached.”

Morgan Academy opened scoring in the bottom of the first frame when C.J. Crocker reached home on a passed ball to take a 1-0 lead.

Clarke Prep jumped ahead 2-1 in the top of the second when Cody van Winkle and Powell Agee reached home on a single, but the lead would be short-lived as Milton Hand evened the score with a run on a passed ball at the bottom of the frame.

The Gators sank their teeth into a 5-2 advantage with runs from Connor Bumpers and Will Windham in the fourth and a deep shot by Ashton Williams that rolled up against the right field wall for an inside-the-park home run in the fifth.

The Senators bounced back in the bottom of the fifth when a Crocker single brought home Henderson. Crocker later scored a run of his own after being batted in by Clements to cut the Gators’ margin to 5-4.

In the bottom of the sixth, The Senators tied the contest when John Allen Ingram came home on a passed ball with Clay Beers at the plate.

Beers served up a sacrifice fly deep to right field to score Barron Frazer and put Morgan Academy ahead 6-5.

“That was huge,” Coach Clements said, “Clay’s been kind of struggling at the plate a little bit. He’s been working his tail off getting extra reps in the cage. We’ve been talking about approach and getting that front side down early, keeping our hands back and trying to find the barrel, then there he is. He’s up in a big situation, one out (with runners) on second and third, and line drive it right. We’re able to tag and score.”

A single by Clarke Prep’s Brett Dailey brought home Jay Davis to make the score 6-all in the top of the seventh.

“This guy here, T.B., he came through at the end and really helped,” Thomas said. “Defensively, we didn’t play our best game, but we found a way to finish it at the end.”

Clements went 3-for-5 at the plate with an RBI.

“C.J. came up before me and moved Cade to third base,” Clements said. “Cade got a big walk, and I knew I had to get a hit. I thought about it and had to find a way to score the run and put our team back on top.”

The Senators closed out the evening with an 11-0 romp of the Gators in five innings. A seven-run surge in the fourth frame put Morgan Academy in position to run-rule Clarke Prep.

Hayden Roberts picked up the victory for Morgan Academy, allowing one hit and no runs with seven strikeouts in five innings.