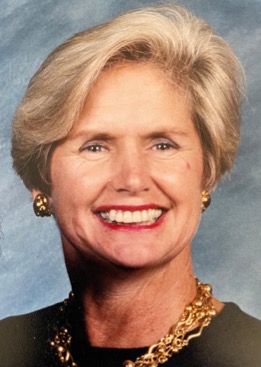 Jean Perry Soule Gamble, community and state activist Bunny Gamble (nee Jean Perry Soule) died Saturday, April 9 at her Selma AL home after a prolonged illness. She was 78. The fourth of the six children of William Latten Soule and Mary Moseley Oliver, she was raised in Pensacola, Florida and was a 1961 graduate of Pensacola Catholic High School. She was a member of Kappa Delta Sorority and a graduate of the University of Alabama. It was there that she met William Jordan “Bill” Gamble and married in 1965. They made their home in Selma where they raised their three children and she began years of community volunteerism.

Bunny Gamble was the first female chair of the Selma City School Board on which she served 12 years. She was a member of the first class of Leadership Alabama and, on the state level, served as an advocate and member of the board of trustees for the Alabama Institute for Deaf and Blind for many years.  She was also President of the National Society of the Colonial Dames in the state of Alabama.

Her interests were varied and her friendships treasured.  An avid reader, she worked for years at the Selma Public Library where she found like-souls in forming a diverse book club, worked in adult services and in honing genealogy research skills.

As an active member of St. Paul’s Episcopal Church, she was a long-time Sunday School teacher, member of the choir,EYC advisor and head of the church fundraiser Lobsterfest.  The Gambles were also active members of the Cursillo Community of the Episcopal Diocese of Alabama.

She will be remembered for her servant’s heart, her beautiful mind and winning smile. Her friendships were varied and found in many areas of the state, including the Perdido Bay area where several generations of the Gamble family have had summer homes.

Bunny Gamble is preceded in death by her parents and her brother, C.M. Oliver Soule.

In addition to her devoted husband of 56 years, she is survived by her daughters, Katie Courtney (Jim) of Mobile, and Mary Yancey (Michael) of Birmingham, and son Will (Allison) also of Mobile; grandchildren James and Perry Courtney, Jack Wilks, Eva, Walker and Watts Yancey, and Alex and May Gamble. Also surviving are her siblings, Gay Duncan of Pensacola, Bill Soule Jr (Peggy) of Newland NC, Cindy Davis (Tommy) of Birmingham, John Soule (Susan), sister-in-law Mary Jane Soule of Pensacola, sister-in-law Susan U. Soule of Pensacola, and brother-in-law Harry Gamble (Molly) of Selma, and a host of nieces, nephews, and cousins. The family would like to thank Lucinda Smart for her 49 years of friendship and care. They would also like to thank Sallie Howard and Emmanuel Sanders for their support.