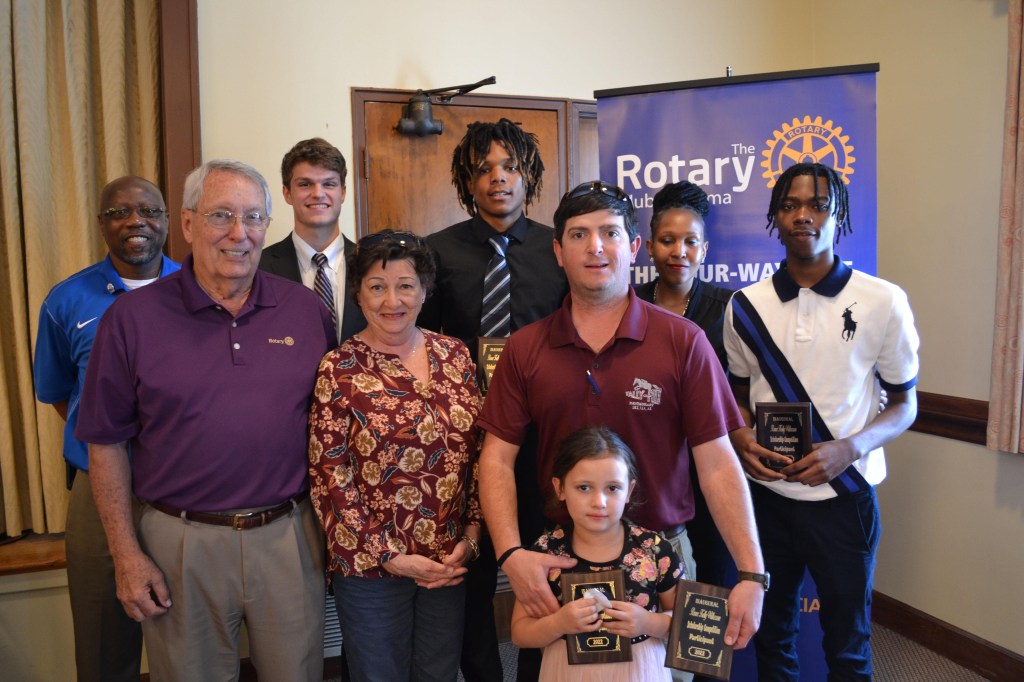 Rotary Club Co-President Jerria Martin said the competition existed prior to this year, but the club chose to name the scholarship after Wilkerson, the youngest club president in the organization’s history. Wilkerson passed away Jan. 13, 2017, in a single-car accident.

“Renee really had a heart for the community,” Martin said. “She was a Rotarian at heart, and she started, literally, straight out of high school. That was the awesome part is she started at such a young age, always coming with her dad, Bob Kelley, to the Rotary meetings, and then, it made her want to be a Rotarian.  … We just thought there was no better way to honor her than naming this scholarship after her and celebrating her life and legacy of service.”

Selma High School’s Devon Benjamin, Morgan Academy’s Wilks Chittom and Dallas County High School’s Darius Nix each delivered presentations, limited to between 5-7 minutes in length, to explain why they deserved to be the recipient of the competition’s top prize, a $1,500 scholarship. Rotary Club members ranked each presentation by assigning the candidates a number grade from 1-3, with 1 being the lowest and 3 the highest.

Nix claimed the top prize with his presentation centered around achieving goals, being a mentor and doing the right things even when no one is watching.

“I want to help young kids just like me,” he said. “People do not understand how much teenagers go through. I want to make a clinic, a center where kids can come and be themselves, where they do not have to be scared, where they have somebody to vent to, where there will be no bullying and there will be no picking on. They can just act themselves.”

He said he believes he can make this goal happen once he completes his four years at Troy University and added he would name the center William’s World, in honor of his grandfather who passed away.

An aspiring musician, Chittom finished in second place and earned $1,000 to put toward his education at Samford University in the fall.

“Assuming I have success as a guitarist, I plan on returning to Selma and hosting musical festivals and events,” he said. “I would love to see live music and bands rise to the scene of Selma and make it a hub for the arts. I want to work with Arts Revive to attract music and art lovers to Selma and the surrounding area. I am proud of city and what the residents create.”

When he was 11 years old, Chittom said he was rushed to a hospital in Birmingham and was diagnosed with Type 1 diabetes. When the doctors asked if he wanted the doctors or his mother to give him his first shot of insulin, he opted to do it himself.

“I knew this illness would be manageable,” he said. “Even at young age of 11, I knew independence and self-reliance were not only good virtues, but necessary for success. Since my diagnosis, I’ve been completely independent, and I’ve been able to compete in sporting events, travel and play in a band. Managing diabetes made me mature rather quickly and made me become responsible for my health.”

Benjamin, who took third place and will receive $500 for his future education, said he realized what excellence in academics could do for him when he brought home his first-grade report card and it had all “As.”

“In that moment, I knew I would always strive for the highest grade because I knew what I could achieve at a young age,” he said.

“There are little to no Black male doctors in Selma,” Benjamin said. “I would like to be a pediatrician to make history and show the City of Selma that it doesn’t matter where you come from … I would like for my patients and their parents to have a relationship with me and be informed about the importance of their health and diet so we can cease the problem of diabetes and high blood pressure in the community.”

Martin she was impressed by the trio of students who participated in the competition and that they each did a superb job in delivering their presentations.

“I truly believe that each one of them will carry the legacy of Renee,” she said. “All of them talked about the service they were doing in the community. “They talked about the heart that they had for people and helping others. I think there’s no better fit than these three young men to receive the first Renee Kelley Wilkerson award.”