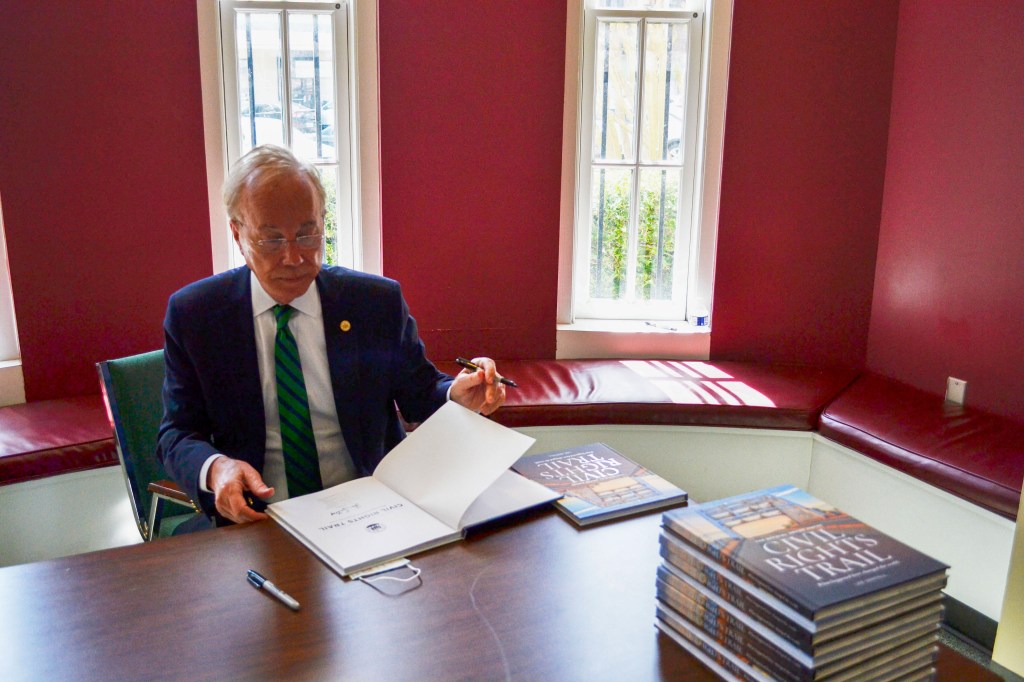 Appointed to his position 20 years ago by former Alabama Gov. Bob Riley, Sentell said the book idea came from work he has done to highlight significant Civil Rights Movement happenings.

“The book is an outgrowth of a website for the U.S. Civil Rights Trail that our office and Luckie Advertising in Birmingham created five years ago to showcase about 100 Civil Rights landmarks across the South,” he said.

Over 30 library visitors stopped by to pick up a signed copy of the book, eat lunch and hear Sentell speak about the book.

Sentell said after reading in a group tour magazine that teachers from Chicago and Detroit were bringing their Black schoolchildren to visit locations on the Alabama Civil Rights Trail, he asked his staff If they had a brochure to attract others. When he was told no such brochure existed, he told his staff to create one.

He said they created first brochure of the Alabama Civil Rights Trail in 2004 and published it for 10 years.

While the brochure didn’t get much attention in that span, Sentell said Civil Rights has become a significant tour topic in the past seven-to-eight years.

“People are coming to Alabama and surrounding states by the busloads now.” he said. “We’ve got a group from Harvard University coming within the next two week. We’ve had Stanford University here earlier this week.”

A former journalist with experience at the Auburn Plainsman and The Decatur Daily, Sentell said his passion for wanting to inform generations beyond his own about what happened during the Civil Rights Movement of the ‘60s motivated him to produce the book.

“As I discussed the subject with people from different states, nobody knew why whatever happened in Selma was different than what happened in Birmingham or different in Nashville,” he said. “We picked the 14 cities in the Deep South that have more museums about Civil Rights that people should come and see. I did a short news summary on each of those 14 chapters so somebody could absorb, in a few minutes, what happened in a particular city.”

“Art was at Southern Living for 20 years, and he’s an amazing photographer,” Sentell said. “I asked the ad agency to find historic black-and-white photos from the ‘60s where something happened and go re-photograph those landmarks to show that those buildings are still there.”

He added the goal is to encourage people to come visit the landmarks on the trail so people will have the contextual background whenever an important occasion in the Civil Rights Movement is mentioned.

The stop in Selma was the first book signing held in Alabama during the tour. The book tour began in Topeka, Kansas.

“I started in Topeka because that’s where the Civil Rights Movement really started with the Brown Vs. Board of Education decision,” he said.

“Lee’s visit made us all proud of Selma’s history!” she said. “From Barack Obama’s speech about Selma to the anticipated lighting of the Edmund Pettus Bridge, Lee brought a special message of history and the future all rolled up into one!”