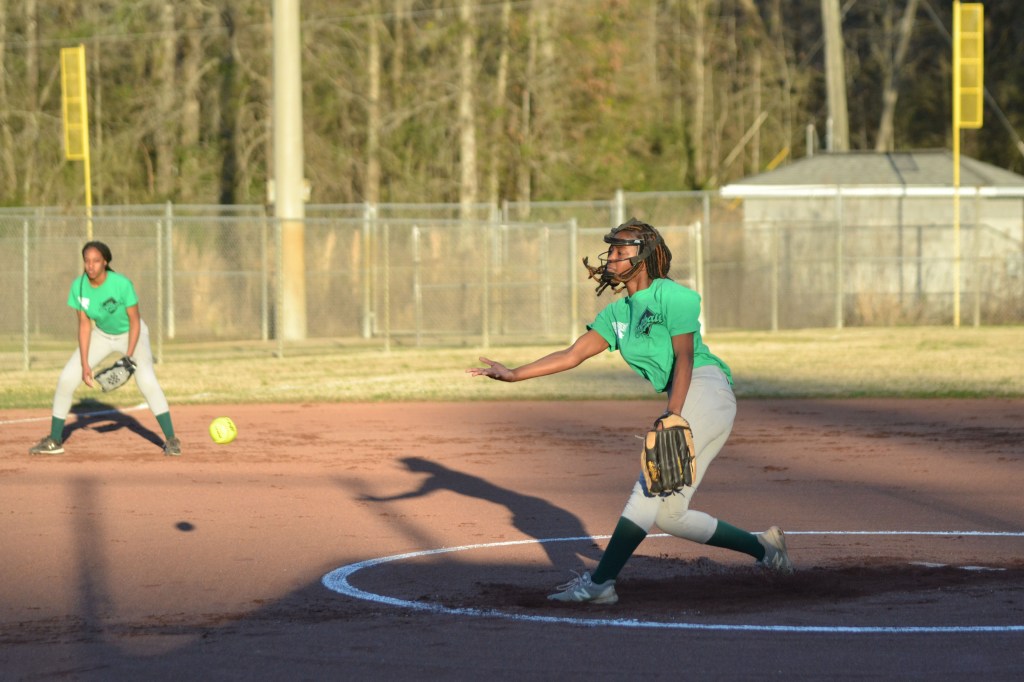 The Lady Hornets (3-4) buzzed around the bases 13 times in the top of the second inning to build a 20-0 lead at what would end up being the halfway point of the three-inning contest.

“Aggressive base-running is always part of our strategy,” said Venecia Eaton, Dallas County girls head coach. “We have speed runners, so we always put them to use. That’s what we do on an everyday basis.”

All runs scored by Dallas County came from players reaching home on fielding errors or stolen bases due to passed balls and errant Southside-Selma pitches.

“It was all passed balls, walks, steals – that’s what we do,” Eaton said. “When you play teams like Southside, I don’t take advantage of them … As a coach, you don’t try to embarrass them. You just try to play your game and show good sportsmanship. That’s what we did.”

Woods pitched for Dallas County and struck out eight Southside-Selma batters out of the Lady Panthers’ 12 opportunities at bat. She allowed one hit and walked four batters.

“She’s a new pitcher,” Eaton said. “She started out last year for us at the playoffs. She’s been going to pitching lessons, and she’s our starting pitcher. She’s great. She’s just in the 10th grade, so we’re looking forward to two more years of her.”

Ny’Asija Gipson and Taniya Dixon scored Southside-Selma’s first two runs of the game in the bottom of the second due to an infield throwing error. Woods walked Latericka Edwards, who added a third run after stealing her way around the diamond.

The Lady Panthers (0-1) added another run in the bottom of the third.

Southside-Selma head coach Idetta Clay said the bulk of her team just wrapped up a run to the state tournament in basketball and haven’t had many opportunities to prepare for their season-opener.

“They haven’t really had time to practice,” she said. “We’ve been practicing, but they just finished up (March 1). They’ve really not adjusted yet. We’re going to have to work on that and get some extra practices, but the weather isn’t working in our favor, either.”

Clay said there was plenty of room for improvement as the team works to transition into softball shape.