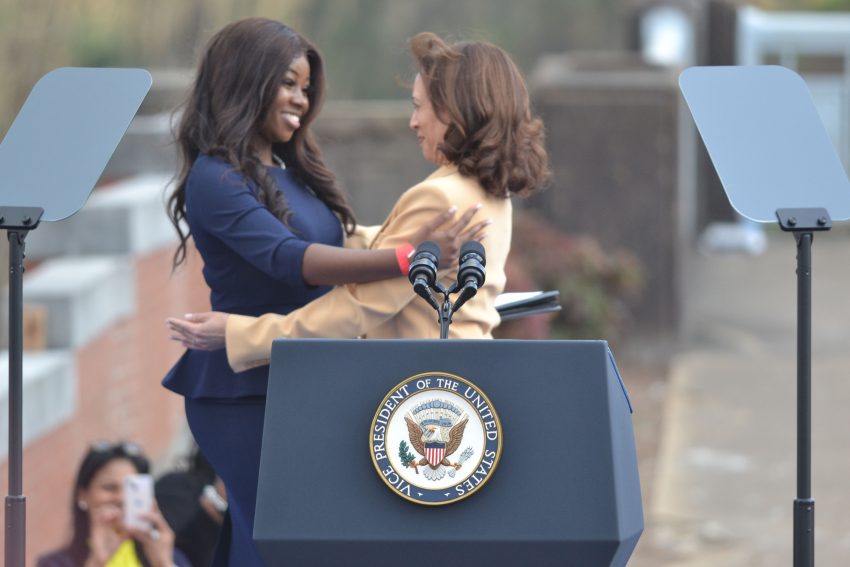 As Harris headed to the podium, she hugged Angion, the reigning Miss Alabama State University.

“I had the honor of introducing the Vice President of the United States of America,” Angion said.

Angion called introducing Harris as one of the greatest moments of her life.

“I have been attending the Selma Jubilee since I was a young girl and I would have never thought that this would be my destiny.️,” Angion said. This opportunity was truly a surprise and I would like to thank the people who got me here.”

City of Selma IT Director John Kinnerson Jr. was recognized by the White House Communications Agency  for providing technology support during Harris’ visit. Kinnerson received a certificate of appreciation for his hard work and dedication.

“It’s an honor to be recognized by Vice President Kamala Harris, the White House staff, and US Secret Service,” Kinnerson said.

Harris, the first female, African American and Indian American Vice President, praised Foot Soldiers Amelia Boynton, Dr. Charles Lafayette, FD Reese and John Lewis in fighting for the right vote on March 7, 1965, known as Bloody Sunday. They were among those beaten by white state troopers attempting to cross the Edmund Pettus Bridge. It eventually led to the 1965 Voting Rights Act signed by then-President Lyndon B. Johnson.

Harris said the right to vote remains an issue today.

“In a moment of great uncertainty, those marches pressed forward and they crossed,” Harris said. “We must do the same. We must lock our arms and march forward. We will not let setbacks stop us.

“We know that honoring the legacy of those who marched then demands that we continue to push Congress to pass federal voting rights legislation.”

Lynda Blackmon overjoyed to watch Broadway Musical based on…