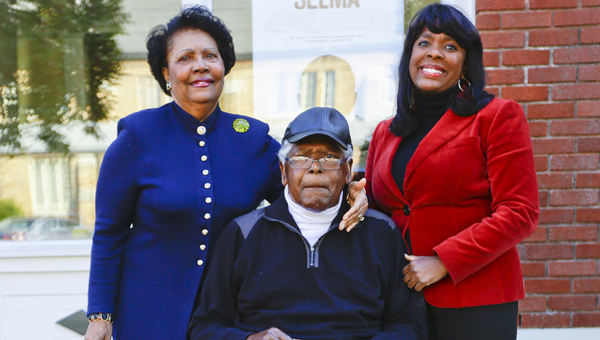 Congresswoman Terri Sewell stands outside the Walton Theater with her parents, Selma natives, Coach Andrew and Nancy Sewell. The three attanded a Saturday showing of the film "Selma".

The American Cancer Society Cancer Action Network hosted a virtual event on Feb. 3 with Rep. Sewell to highlight the promise of new screening technologies and need for legislation to create a pathway for Medicare coverage to ensure access for older Americans at the highest risk of developing cancer.

President Joe Biden announced on Feb. 2 to cut cancer deaths in half over the next 25 years.

Sewell is Sponsor of the Medicare MCED Act, which was introduced in both the House and the Senate introduced last year. Sewell said the bill now has 150 cosponsors, including both Republicans and Democrats.

“I was motivated personally by so many health disparities that have led to so many African-Americans disproportionately being affected by cancer – including my hero and colleague John Lewis,” Sewell said. “Almost everyone, whether it has been in their direct family, or their church family, has been affected by cancer in some way, and unless government gives the resources to lung cancer and pancreatic cancer, we can’t find a way to screen for some of these tests.”

Kimberly Alexander, a Jefferson County woman who has been diagnosed with lung cancer praised Sewell’s work to promote access to screenings and improve early detection.

“Knowing that lawmakers like Rep. Sewell are in the fight give me a sense of pride and assurance that my cancer issues, and our cancer issues, will not go unnoticed nor unaddressed,” Alexander said.

According to the ACSCAN, overall cancer death rates have declined for over two decades in the U.S., but racial, socioeconomic and geographic disparities persist especially in states like Alabama with a higher prevalence of underserved communities.

The organization said the multi-cancer tests can detect cancer with a blood draw, may be more accessible to these communities, extending screening opportunities to rural areas of the state and within communities of color if Medicare is available.

“Fighting cancer starts with knowing you have it, which is why early detection is so often a key indicator of successful health outcomes,” ACSCAN President Lisa Lacasse, said. “As new and innovative screenings become available, we must ensure patients – particularly those 65 and older, who are more than seven times more likely than younger Americans to be diagnosed with cancer – can access them without delay.”