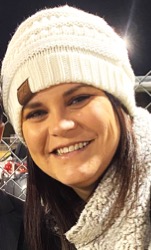 Charli was born March 8, 1986 in Amory, Mississippi.  She was a member of First Baptist Church of Pickensville and a former teacher.