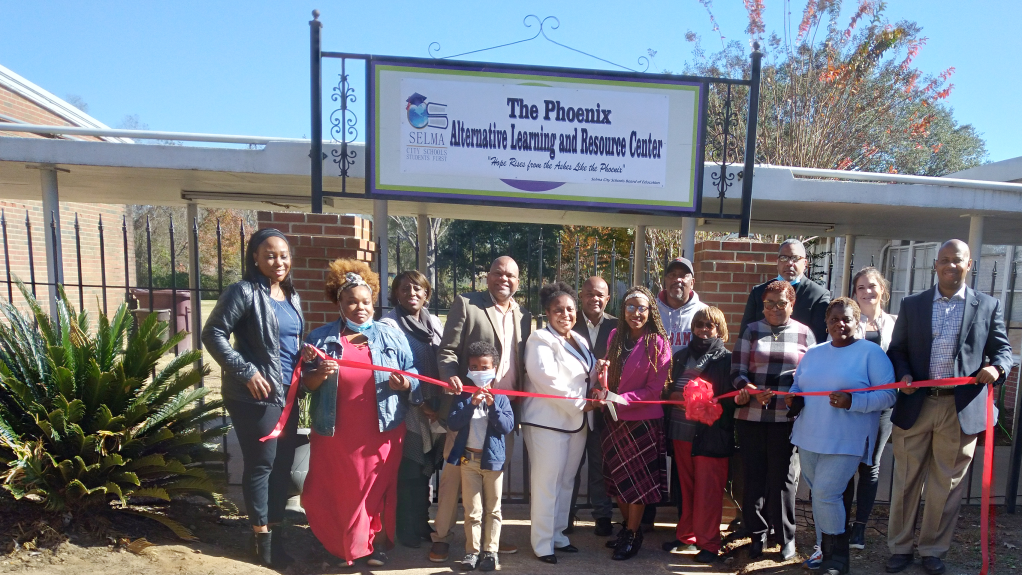 The city school system Friday celebrated a milestone in its quest to improve safety at Selma High with a ribbon-cutting for The Phoenix Alternative Learning and Resource Center.

The school system hosted the event with the Selma and Dallas County Chamber of Commerce and Tourism.

The system opened the 2021-22 academic year with a virtual alternative school but relaunched an in-person facility for the same purpose Nov. 1 at the former Hope Academy.

Safety has been a hot button topic at Selma High since a shooting on campus April 1.

“Thankfully no one was hit or hurt, but this was still a traumatic event for our school community,” Superintendent Dr. Avis Williams said. “This was the second day of in-person learning after over a year of remote learning due to the COVID-19 pandemic. As a result, we shifted our high school back to remote learning.”

School officials teamed with the Alabama State Department of Education, Mayor James Perkins Jr., Police Chief Kenta Fulford, District Attorney Michael Jackson and others to take steps to prevent another shooting, Williams said. However, safety continued to be an issue when students returned to campus for the new school year.

There were 15 fights on campus during the first eight weeks of school. Since Oct. 12, there have been only two as school officials have begun administering new programs and policies geared toward keeping the peace.

Those steps include counseling opportunities for students. Williams said Friday that 122 seniors, 115 juniors, 100 sophomores and 140 freshmen have received counseling recently in one form or another.

Another step was relaunching an in-person alternative school, something the Board of Education had pushed for. Tamitha Rowden is the principal of the alternative school.“We don’t want this center to only be punitive,” Williams said. “We look forward to working with and supporting Ms. Rowden as we look at non-traditional learning from a holistic standpoint.

“We talked to our scholars about what are some of their other needs around alternative learning, up to and including a twilight school. We may need to have some (options) for our scholars who have obligations that they have to engage.”