Keith Gets Shot at No. 1 in quarterfinal 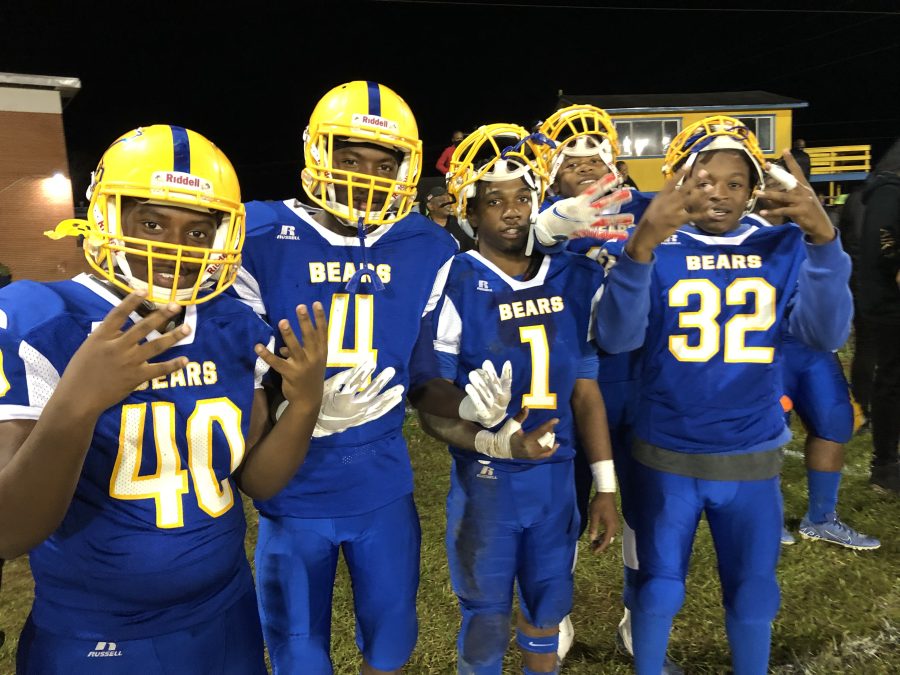 When given an opportunity last week, No. 7 Keith was ready to strike.

Javon Richardson returned the second-half kickoff 95 yards for a touchdown, allowing the Bears to both seize momentum and wipe out a 2-0 deficit en route to a 19-2 win over No. 6 Notasulga.

The victory was Keith’s first-ever in the second round of the state playoffs, and it propelled the Bears into a quarterfinal against No. 1 Brantley on Friday at 7 p.m. at home. Brantley (11-0) advanced with a 48-15 win over Millry.

Friday’s winner will face the winner of a quarterfinal between No. 3 Maplesville and No. 4 Sweet Water in a semifinal Nov. 26. Keith would travel to Sweet Water and host Maplesville.

In studying film of Notasulga, Keith coaches had noticed the Blue Devils kicked the ball through the end zone on nearly every kickoff for an automatic touchback, but Bears coach Anthony Lumpkin told Richardson to be ready in case Notasulga failed to repeat that during last week’s showdown. Richardson assured his coach he would be ready, and his return sparked a big second half for the Bears.

Lumpkin said he wasn’t overly concerned about his team trailing 2-0 at halftime.

“We just had to shake the jitters and make some adjustments,” he said. “There were a few misunderstandings on blocking assignments, miscommunication at the line of scrimmage and stuff like that.”

Despite not scoring at that point, the Bears had made some big play defensively, keeping Notasulga out of the end zone on two occasions after the Blue Devils had reached the Keith 25-yard line.

“They were huge,” Lumpkin said of the defensive stands. “The thing about it was, they were struggling to move the ball on offense. We were just shooting ourselves in the foot (offensively). Keeping them out of the end zone was important as far as keeping the game intact.”

Keith’s playoff matchup with Brantley is the second between the squads in as many years. The Bulldogs won 48-6 a year ago.

“It’s going to be a big challenge,” Lumpkin said. “They run it well and they pass it well. They are not No. 1 in the state for nothing. They are a complete team. We’re going to try to make them one-dimensional. If we can limit the passing, I feel good about being able to stop the run.”

Brantley is in Crenshaw County, about 60 miles northwest of Dothan. The Bulldogs have won 29 area or region championships and four state titles (1993, 1998, 2009 and 2012). Their all-time playoff record is 76-36, and last year’s squad reached the state semifinals.

Key personnel include quarterback Tucker Kilcrease (6-foot-1, 186 pounds), Daquan Pittman (5-9, 170) and linebacker Robert Shine (6-0, 215). Pittman is listed as a running back and strong safety by MaxPreps, but Lumpkin described him as a utility player and Brantley’s best offensive player.

Lumpkin said his team will attempt to control Friday’s game by sustaining drives. The Bears will be facing a Brantley defense that Lumpkin described as big and physical defensively. He said the Bulldogs will often use a three-man front and drop eight into coverage. “They’re always where they’re supposed to be,” he said. “Everything we get is going to be earned.”

“They do a little bit of everything,” the Keith coach said. “Everything they do, they execute it well. This week is a tall challenge, but I think our guys are up for it. If we can limit the big plays, I really love our chances for being able to pull out the ballgame.”