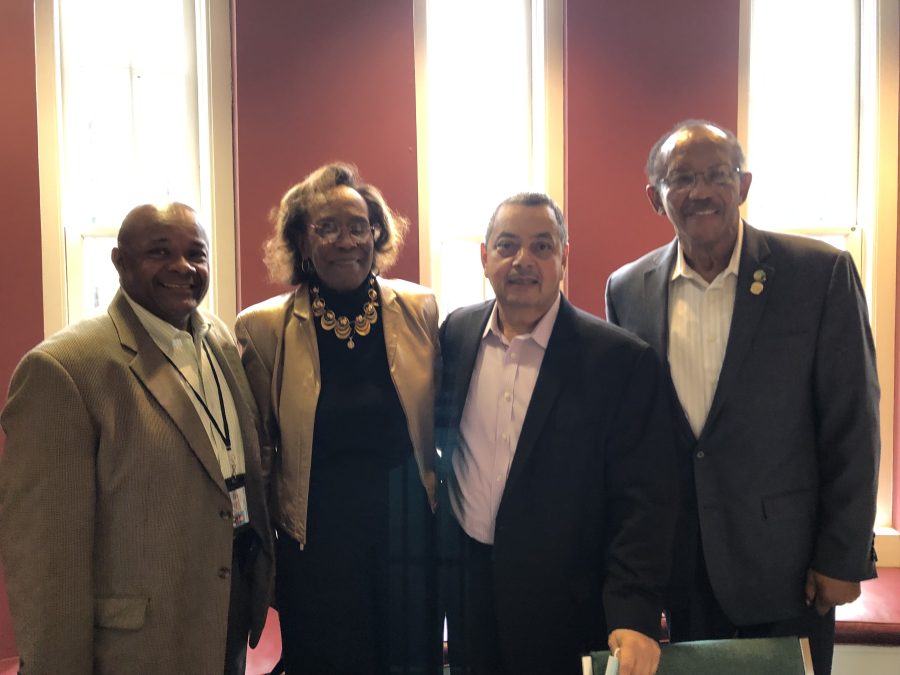 Mitchell spoke at “the lunch at the Library” program and discussed the book written about him, “Touchstone of Determination.” Eatmon-Jones called it It’s a story about determination — and making a difference in the world.”

The book was written by Mitchell’s cousin, author Linda Eatmon-Jones and published two years ago. They grew up in Ahoskie, North Carolina.

Mitchell, who’s been at WCCS since 2000, said he was surprised when Eatmon-Jones approached him about a book.

“It’s interesting how we got here,” Mitchell said. “One day she called and said, ’I want to write a book about you.’

“I asked her, ‘why do you want to write a book about me?’ She said, “Because you’ve great things.’ I told her, ‘I don’t feel like I’ve done anything. A lot of people have done great things.’

Mitchell said he predicted as time passed that Eatmon-Jones would veer away from writing a book.

“I was reluctant and said yes. I figured she would bog down and get busy and she wouldn’t have time to write a book. My cousin was smart. She started early and wrote the book. She talked to around 60 people across the country about the book.”

Mitchell said he and Eatmon-Jones planned to do book signings across the country, but her death and the COVID-19 pandemic prevented that from happening.

But Mitchell said he still plans to do a series of book signings in the near future after the pandemic slows down. He also plans to put the book in schools across the Black Belt Region.

Under Mitchell, WCCS has become a top-notch two-year junior college. He established the first Early College High School Program in the State of Alabama, which was housed on the campus of WCCS.  He developed and completed a $38 million master facility plan for renovations and new construction.

Mitchell also secured $12 million in funding for state-of-the art equipment and technology.  During his tenure, he raised over $70 million; accumulated over $15 million in reserves, and to date, the College has no long term debt.

Mitchell and his wife Priscilla have three children: Brian, Nicole and Mario and five grandsons.