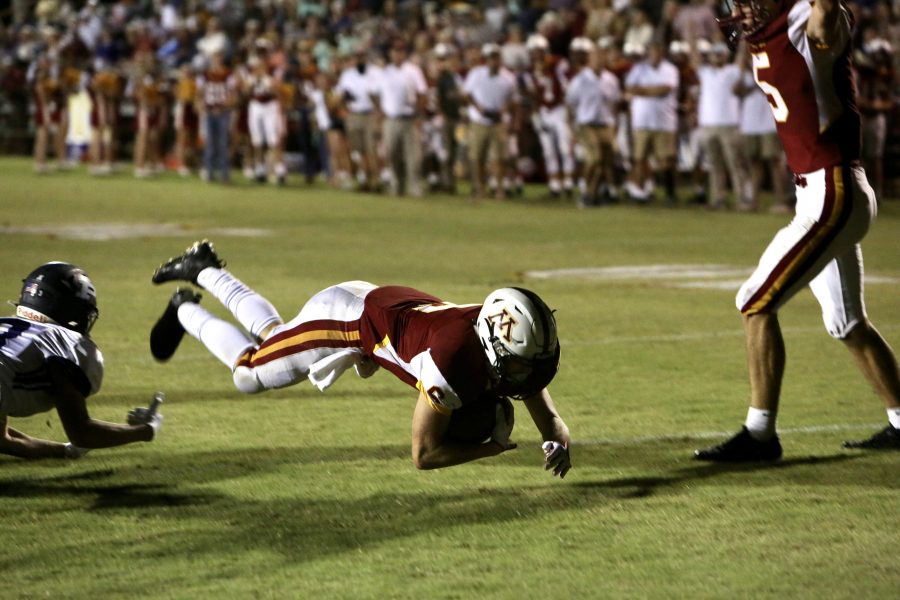 On a night when both offenses started with NASCAR-like speed, host Morgan Academy couldn’t keep up with No. 10 Glenwood in a 54-41 loss in the opening round of the AAA playoffs.

The teams were tied at 28-all when the Gators (6-4) began taking command. Quarterback Dallas Crow threw to Radonda Beauchamp for a 57-yard touchdown as Glenwood led 34-28.

The Gators took advantage of a interception, marching 65 yards and converting a third-and-goal from the 15 when Crow found Beauchamp again for the TD and a 41-28 lead with no time left before halftime.

“They were really good,” Morgan coach Danny Raines said of the Gators. “Our kids played really well. We made some mistakes. … They got on us some speed sweeps early. We missed some tackles on some inside runs. Our kids kept fighting. That score before the half … that was a demoralizing blow. When you’re playing somebody as good as that, the margin of error is so slim.”

Glenwood scored the only TD of the third quarter on a Crow 26-yard pass. Morgan failed to convert on fourth-and-8 deep in Glenwood territory early in the fourth quarter, and Aaron Burton broke off a 92-yard touchdown run on the next play for a 54-28 advantage.

Morgan (5-6)  tried to come back, scoring two TDs in the final quarter on 1-yard keepers by QB Andrew Thomas. Completions of 17 yards to Cink Minter and 19 yards to Allen Lightfoot were the key plays on the first of those scoring drives, and John Allen Ingram’s 55-yard run helped power the second.

Lamont Burt recovered Morgan’s onside kick with about three minutes left, all but ending the rally.

Morgan built leads of 7-0 and 14-7 in the first quarter as Thomas threw TD passes of 6 and 17 yards to Minter, but Glenwood answered each time.

Thomas threw two more scoring passes before halftime, both to Rhyne Williams – 23 yards on a bubble screen and 30 yards that tied the game at 28-all.

The loss brought the season to a close for the Senators, as well as the high school football careers of 12 Morgan seniors. Morgan faced its share of adversity this fall, but Raines complimented his team for its approach through the year.

“I couldn’t be more proud,” he said. “Not a whole lot things went our way, but that’s sports. But they came back each Monday ready to come to work. They prepared diligently each game. There was nothing like going into Friday night with these guys because they were going to give us everything they had every Friday night.”