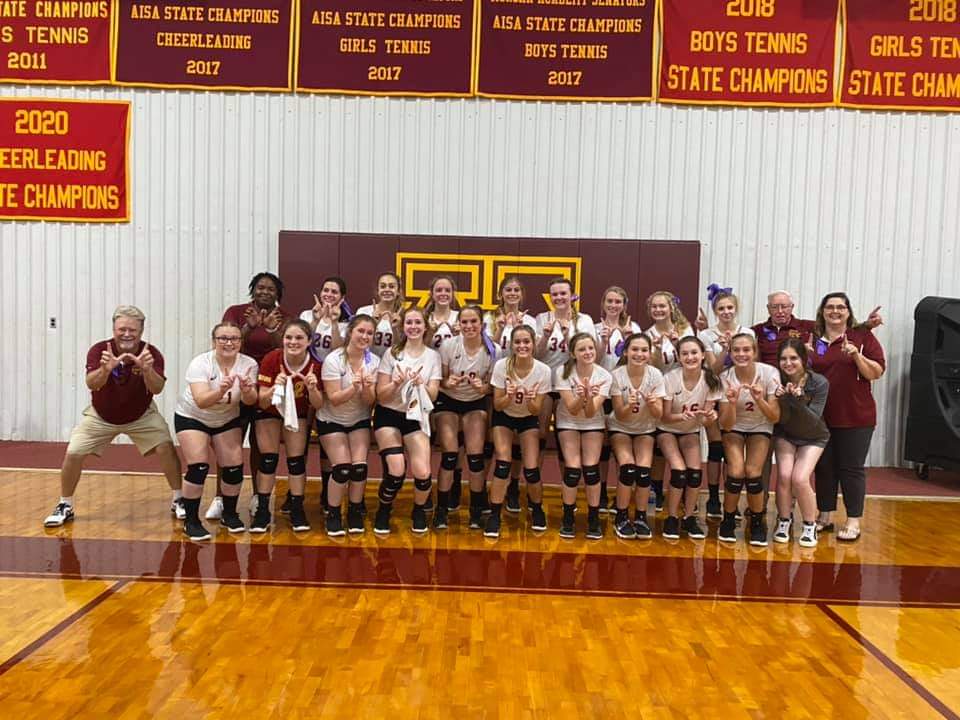 Senior setter Sarah Thomas had a message for Glen Graham when he took over this year as coach of the Morgan Academy volleyball team.

“I told coach he can yell at me as much as he wanted,” Thomas said. “It wasn’t going to hurt my feelings, it was just going to make me better.”

Thomas wasn’t the only Lady Senator who greeted her new coach with a positive attitude, and the result has been a winning season that will culminate Wednesday with a trip to the Cramton Bowl in Montgomery for the AISA AAA state tournament.

Morgan Academy, the second seed from the West, will face East third seed Lee-Scott in a state quarterfinal at noon.

The semifinals will follow, and the championship match is Thursday at 3 p.m.

Chemistry, between Graham and his players and among the players themselves, has been a key to Morgan Academy’s success.

“Coach Graham, he believes in us and he sees what we’re capable of even when we really don’t,” junior outside hitter Bailey Brown said. “He believes we’re capable of being a great team, not just a good team. We’ve all come together … We do stuff outside of volleyball. We go out to eat and we do stuff together.”

Said Thomas, “All the girls are close. We’re just like family and we love each other and we all get along, so that makes things easy on the court.”

Graham wasn’t a complete unknown to the Lady Senators when he was hired. Formerly the longtime coach at Isabella High School, he conducted a camp at Morgan last year — and made an impression.

“We knew that he knew exactly what he was doing,” Brown said. “He helped us so much in just that one day, we knew that if we had him for a full season or a couple of years that he would really help the program.”

Morgan will take a 17-11 record into the state tournament. The Lady Senators won their area and then captured second place in the AISA West Regionals.

“I think this year we have really focused more on discipline,” junior middle hitter Keenan Lee McHugh said. “To do what we need to do on the court, we need to focus on discipline. And that’s something we haven’t focused on in the past. We’ve (also) focused more (this year) on technique and breaking the game down, so we can go from there. Coach Graham really has a love for the game, and that really helps us as a team because he loves the game as much as we do.”

Said Thomas, “He holds us accountable. When we make a mistake, he makes sure we fix that for the next point. We have a ‘next point’ mentally. If we have a bad point or if we mess up and lose a point, we forget about it and try our hardest on the next point.”

McHugh believes the focus on discipline will be critical to Morgan’s chances at state.

“We really just have to stay disciplined and keep our mistakes to a minimum and play how we know how to play — and hustle on every play,” she said.

Added Brown, “We just need to keep our heads high and don’t get down on ourselves. We have to go do what we can do.”

Regional results were used to seed this week’s Elite Eight.

“I thought we played tense, a little bit tight,” Graham said. “At times, we looked really good. They seemed to be a little more nervous. But we had moments of great volleyball.”

Graham believes the regional experience will help soothe some of those same nerves heading into state. With multiple courts going at once, the coach said focus will be critical in Montgomery.

“We just have to be mentally tough enough and tune all that excess stuff out,” he said, “and focus on our job and do what we’re supposed to do.”