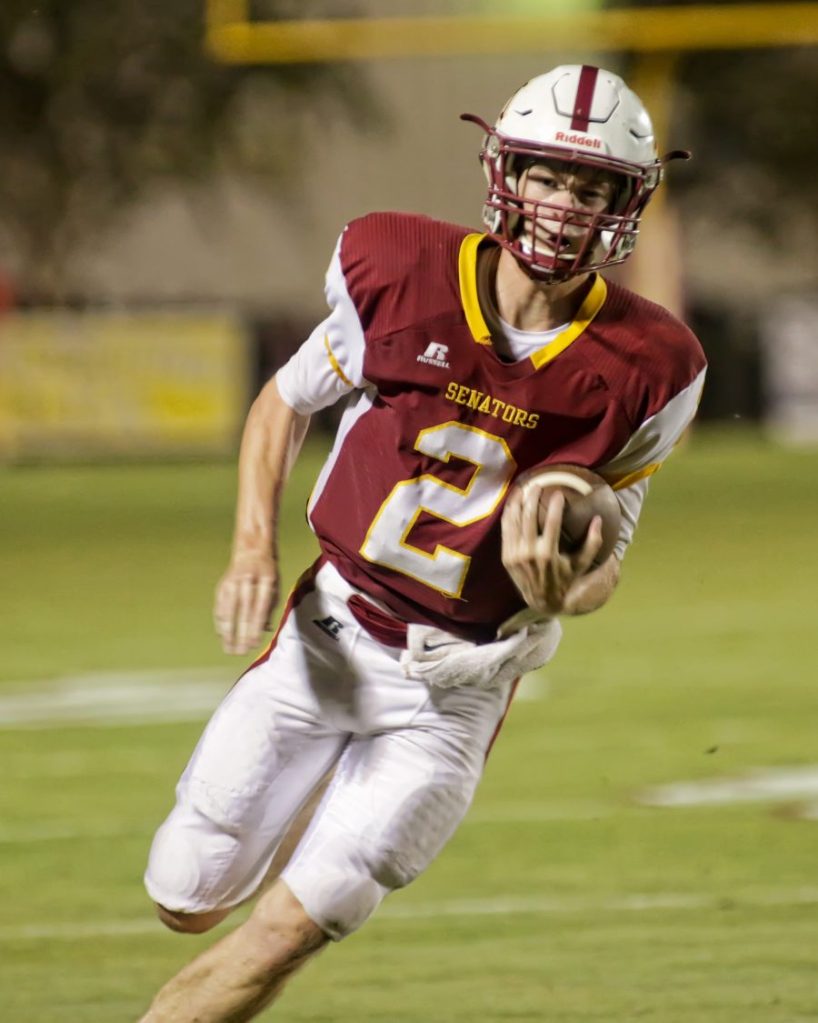 One play. That’s how long it took Rhyne Williams to announce his return to the lineup — and set the tone in a 53-28 win for Morgan Academy at Fort Dale Academy on Friday night.

Williams, playing for the first time since suffering a collarbone injury in the season’s third game, caught six passes for 154 yards as the Senators (5-4, 3-2) clinched second place in AAA, Region 2, and assured themselves a home game to open the playoffs in two weeks. “I thought they did great,” Morgan coach Danny Raines said of his team’s performance. “These kids are a resilient group. We haven’t had a whole lot go our way this year, but they kept coming back and getting ready for the next one. It was a great win and great performance by these kids.”

Williams was Morgan’s leading receiver before going down with the injury, and Raines was happy to have him back. “A huge lift,” the coach said. “Rhyne is such a great kid. He’s worked so diligently, worked so hard to get to where he is. He’s a big-time player. To see him put so much into it this spring and summer and then be hurt the first drive of the third game was a sad situation. He also did a great job working to get back as soon as he could. He’s very deserving of all the success he’s having.”

Williams caught a 12-yard pass from quarterback Andrew Thomas on the first play from scrimmage, and the possession ended with Allen Michael Creech scoring from 6 yards out. A two-point pass from Thomas to Cink Minter made it 8-0. Williams was part of a three-headed monster for the Morgan offense Friday. Thomas completed 17 of 22 passes for 384 yards, while John Allen Ingram carried 16 times for 173 yards. Creech (three touchdowns) and Minter (89 yards receiving) also put together strong games.

The Senators scored touchdowns on their first five possessions and closed the night with 577 yards of total offense. Morgan’s second possession began with a 40-yard pass from Thomas to Williams. Thomas connected with Creech for 9 yards and the score.

The margin grew to 22-0 when Creech scored from 2 yards out late in the first quarter. Thomas had completions of 19 yards to Williams and 30 yards to Minter on the drive.

The Morgan offense put together another scoring march, moving 80 yards. Thomas reached pay dirt from 3 yards out to make it 29-0.

The Eagles tried to fight back, scoring back-to-back touchdowns, the second set up when it recovered an onside kick. Thomas found Williams for 32 yards on the first play, and Ingram scored from 18 yards out for a 36-14 halftime advantage.

Wade Mason kicked a 33-yard field goal for the Senators in the second half. Ingram scored a TD from 10 yards out, and Thomas connected with John Haden Smith for 15 yards and Morgan Academy’s final touchdown of the evening.