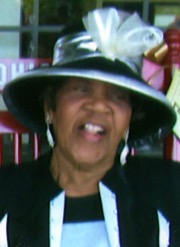 Irma DuBose was born August 19, 1925  in Birmingham, and passed October 14, 2021, while a resident of Friendship Village in Dayton, Ohio. Irma was “the baby” of eight children born to Rev. George and Minnie Connor. She would often remind you of that honor. The family moved to Selma, Alabama where Rev. Connor pastored at Green Street Baptist Church. They later relocated to Linden, where he served as pastor of First Baptist Church and St. Peter Baptist Church. The Connor sisters were well known for their singing and piano playing at local churches in the area. Irma never took piano lessons but played by ear. Irma attended and graduated from the Junior College Department of Selma University in Selma, Alabama. She received her Bachelor of Science in Elementary Education degree from Alabama State College in Montgomery, and began her teaching career in Alabama. As a military spouse, she had the pleasure of educating many young people in Ft. Leonard Wood, Missouri, Bamberg, Germany, Trenton, New Jersey and retiring after 40 years in Willingboro, New Jersey.

Prior to moving to Dayton, Ohio, to be near her daughter Sheralyn, Irma was an active member of Shiloh Baptist Church in Trenton, New Jersey. During her membership, she was a Trustee Aide, taught Vacation Bible School, and worked on many other committees. At the time of her death, Irma was a member of Corinthian Baptist Church in Dayton, Ohio. Irma loved to travel and you would never see her, during her travels, without a hat. She definitely wore them on Sundays for church services but also during the week at the malls, in the grocery store or at her favorite restaurant, Cracker Barrel while dining or sitting in a rocker on the front porch. She never met a stranger. Irma was preceded in death by her parents, husband, MSgt. Bennie DuBose, three sisters, Bessie Adams, Ruby McFadden, Evelyn Sistrounk, four brothers, William Connor, George Connor Jr., Louis Connor and Warren Connor. She leaves to cherish her memory daughters, Sheralyn (James) Lawson, Dayton, Ohio, Odessa Wiggins (Delaware), grandsons James Lawson II (California) and Charles Wiggins Jr. (Delaware), many nieces, nephews, other family members and friends. A special thank you to the staff at Friendship Village and Vitas Healthcare. In lieu of flowers, donations can be made to a charity of your choice. Private graveside services to be held at Dayton National Cemetery. HHRoberts.com