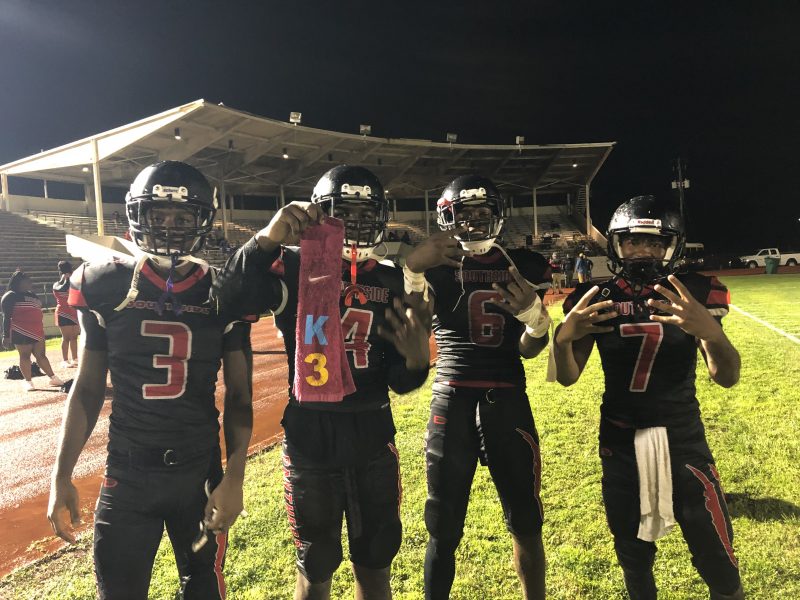 For Southside, the stakes are simple.

Beat visiting Thomasville in Friday night’s Class 3A, Region 3 showdown, and the Panthers will finish second in the region and host a first-round playoff game.

A loss means the Panthers (7-1, 4-1) would finish third and have to travel in the opening round.

Southside is in its third season under coach Charles Moody, and the upcoming trip to the playoffs will be the team’s second in as many years. The Panthers have won five straight since losing to Montgomery Academy on Sept. 10.

Montgomery Academy wrapped up the region title with a 34-16 win over Thomasville on Friday. Now, the Panthers will try to hand the Tigers (4-4, 4-1) a second straight loss.

With a game of this caliber, there’s always a chance a team could hurt itself by getting too emotionally charged, but Moody doesn’t believe the Panthers will fall into that trap.

He said the key is being mentally prepared going into Friday night.

“They’ve been texting me all weekend,” Moody said of his players Monday. “They know what’s at stake. They’ve been in some big games in their careers. The program is growing. Last year, when we went to the playoffs, a lot of them had not tasted that playoff environment. This is going to be a playoff environment Friday night.

“When you know the game plan and know what you are doing, it takes away the anxiety. And minimizing the anxiety increases the focus level.”

Moody said Thomasville likes to control the game. He said the Tigers have a great defense with a strong front seven, and that they like to run the ball.

The coach said the Tigers have several guys who can run the ball well, including the quarterback and multiple running backs.

“At the end of the game, they really want to win time of possession,” Moody said. “They’re disciplined. They’re not going to make a lot of mistakes. In some of their losses, they were in the position to win. Friday night (against Montgomery Academy), they were in control until the end of the third quarter.”

Still, Moody said he liked the matchup of his defense against the Thomasville ground game.

“If we stop the run, I think that will put us in a very good position to win the ballgame,” he said. “Our defense has had a very good year, especially when they understand and know the game plan.

“I’m very confident in our guys on defense. They only thing that scares me is when we don’t line up correctly, but if we line up correctly and know our assignments, I have 100 percent confidence in our defense.

“When you really look at our defense over the course of the year, we really haven’t given up a lot of points. Many of the points we’ve given up have been by our second-team defense.”

Southside was impressive in its warm-up for this week’s showdown, a 52-6 win over R.C. Hatch on Friday. The Panthers looked like heavy favorites going into the game against the 1A Bobcats (2-5), and Southside played like it on the field.

“They played really clean,” Moody said. “That was one of our goals — to play clean and not have mistakes.

“We just don’t look at scoreboard. We look at how we’re playing. We didn’t have penalties. We were disciplined. We were doing things the right way.”

Keandre Williams, Sam Taylor, Ernie Campbell and JoJo Hamilton all scored rushing TDs for Southside in the win. Christopher Thomas threw for a TD, and Marquarius Reese also found the end zone for six points. Derick Smith and Amarion Johnson both had pick-6s.

Moody said Southside is hoping for a big home crowd for Friday’s matchup with Thomasville.

“We need the whole city of Selma to come out and support us,” he said. “This game is huge for the community, it’s huge for the future, it’s big for right now. I know Thomasville is going to bring a lot of fans, and we don’t want Thomasville to have more fans that what we have.”

Dallas County- Montevallo: The Hornets (3-5, 3-3) remain in contention for a playoff berth but must win their 4A, Region 3 finale against Montevallo on Friday to have any chance of advancing.

Dallas County is coming off a 62-28 loss to American Christian. Montevallo downed Holt 54-6 on Friday.

For Dallas County, Marquavious Pullom carried 22 times for 174 yards against American Christian. He also had one interception and six tackles.

Keith-J.F. Shields: Keith, the 1A, Region 3 champion, will have a third straight off week after J.F. Shields announced it will forfeit Friday’s game. Keith (6-1, 4-0) last played Oct. 1, when it defeated Central Hayneville 35-8.

Morgan Academy-Fort Dale Academy: The Senators (4-4, 2-2) caught a break Friday night despite dropping a 17-7 decision at Tuscaloosa Academy, which knocked Morgan Academy out of contention for the AAA, Region 2 title.

Should Morgan Academy win Friday, and Monroe Academy drop its region finale to league champion Tuscaloosa Academy, the Senators would be the region runner-up and host a first-round playoff game because they hold tiebreaker advantages over Bessemer and Clark Prep.

With a loss, Selma could still host a first-round playoff game but would need some help in the form of a Jemison upset of Shelby County, which trails the Saints by a game in the region standings but holds the head-to-head tiebreaker with Selma. Jemison is winless on the year.