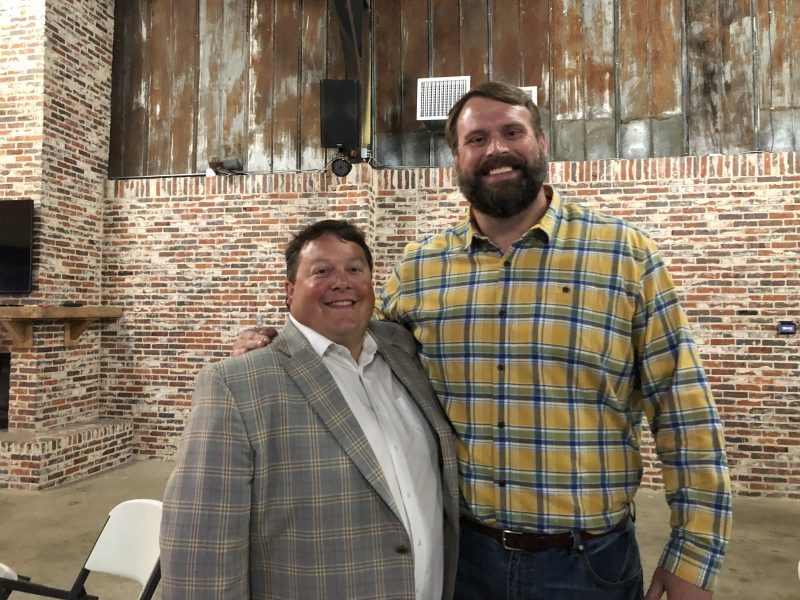 Former Alabama offensive lineman Wesley Britt was the guest speaker at the Selma Quarterback Club at the YNot in Valley Grande.

Britt, who started 46 games for the Crimson Tide between 2000 and 2004, spoke on a variety of topics, ranging from football to family.

The Cullman native talked about growing up wanting to play college football at Auburn. He recalled a story about then-offensive line coach Hugh Nall.

“My choices came down to Alabama, Auburn and Florida,” Britt said. “Coach Nall said I’m sure you will never play at Auburn, but we will still take you.

“Five years down the road, Nall presented me with the best offensive lineman award. Things happen for a reason.”

“The love for this state and my folks is who I am, that’s why I chose Alabama,” Britt said. “I called Coach Spurrier and said ‘I’m going to

Alabama. Spurrier said, “Wesley, I thought you had more class than that.”

Britt said he also got a call from then-LSU coach Nick Saban in 1999.

Britt said it was in the cards for him to attend Alabama. As a freshman, Britt met his future wife, Katie, a Republican candidate for U.S. Senate. They have two children.

“It was a blessing to sign with Alabama and play at Alabama,” Britt said. “I saw this gorgeous brunette on my first day of freshman orientation. It took me seven years to get my first kiss.  We became best friends.’’

Britt said he enjoyed playing four seasons (2005-2008) with the New England Patriots under head coach Bill Belichek. He was cut in 2009.

“Bill Belichek cares for his players,” Britt said. He called me in his office in 2009 and said, Wesley, you’ve done everything we’ve asked. You’ve played  center, guard, tackle and special teams. I said, ‘You’re going to cut me, aren’t you. Belichek said, “Wesley, you’re going to make it hard on me.’ I said ‘Coach, that’s what I intend to do.’ He cut me anyway.”

Britt and his wife eventually returned to school  and rebuilt their lives.