Jones Free’s Chip-In on No. 18 Lifts Alabama to Victory 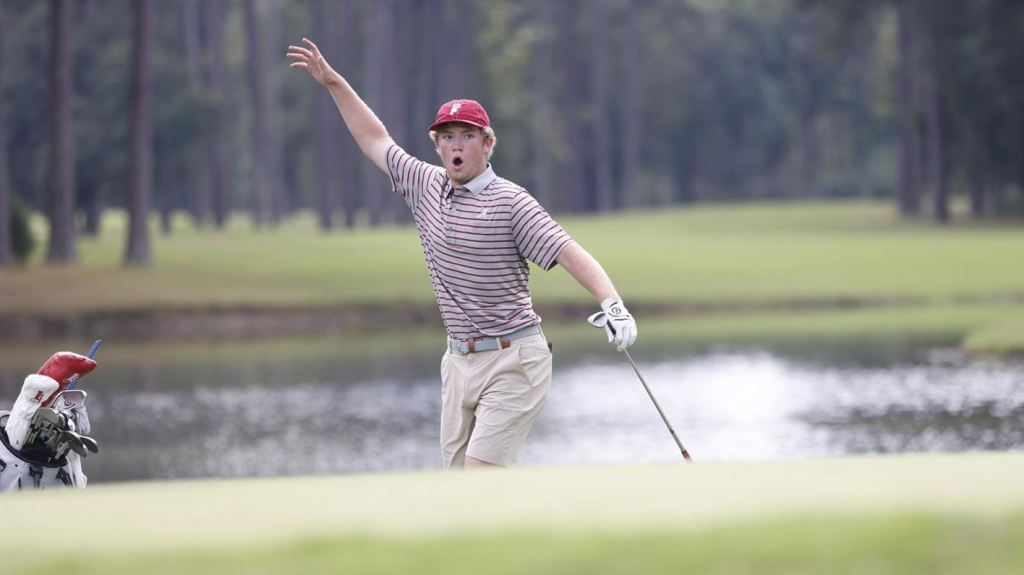 Jones Free’s golf career at Alabama is off to a great start.

The former Morgan Academy All-State performer chipped-in for birdie on the 18th hole to secure a 1up victory and the clinching point in the Crimson Tide’s 3-2 win over Ole Miss in Tuesday’s final round of SEC Match Play hosted by Jerry Pate.

Alabama finished the four matches across three days with a 3-1 record which include three consecutive victories to close tournament action.

“There’s definitely a lot of pressure,” Free said. “My teammates have my back the whole way and it’s been a lot of fun so far. I’m looking forward to the next tournament.”

Free squared off against Ole Miss’ Evan Brown in a back-and-forth affair that featured both golfers holding as much as a two-hole lead. The Selma native held a 2up advantage through 13 holes before Brown won holes 14 and 15 to draw even, setting up Free’s heroics.

“How about that? An 18-year-old Jones Free making a chip-in on No. 18 in his collegiate tournament debut,” Seawell said. “He was doing what freshman do. He would be doing great for a while and then he’d give a hole away. To his credit, he’s not scared.

“His opponent hit a great second shot and Jones needed to hit a great chip and that’s exactly what he did. That’s a credit to Jones and something we practice every day, so I am just really proud of him and the rest of our guys for finishing this event strong.