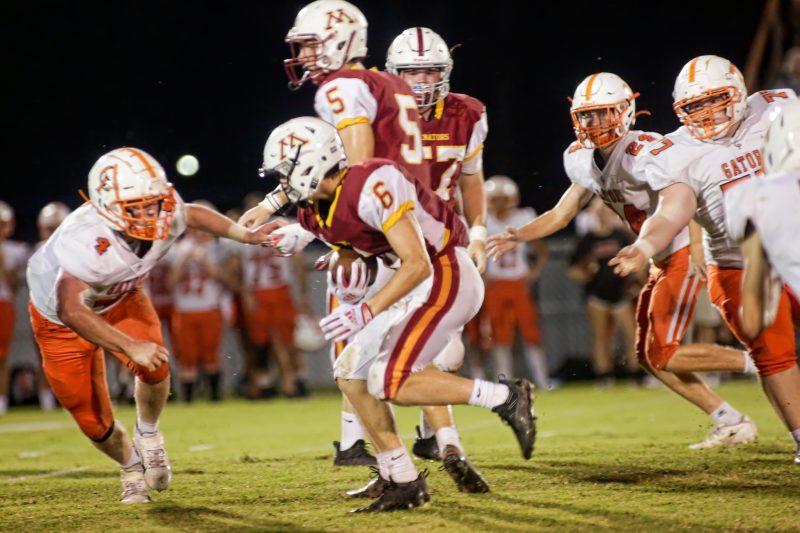 Morgan Academy found itself on the wrong side of an Antavious Jackson highlight reel in a 38-25 loss to Valiant Cross Academy on Friday night in Montgomery.

Jackson rushed 13 times for 333 yards and four touchdowns and also threw for a score. His final scoring run and TD pass came in the final four minutes as the Warriors (2-2) broke a 25-all tie in a game that featured plenty of late drama after the teams were tied 6-all at halftime and Valiant Cross led 12-6 after three periods.

No. 10-ranked Morgan Academy (3-3) tied the game at 25-all on a 53-yard catch-and-run from Andrew Thomas to Allen Lightfoot for Lightfoot’s first varsity touchdown with 3:46 to play. The try for the extra point was wide left.

The Senators threw an interception on their next play from scrimmage, and Jackson settled the matter four plays later when he found Corey Brown for 50 yards and a TD on third-and-17.

“It was disappointing,” Senators coach Danny Raines said. “Our kids played hard, but we just didn’t do a real good job containing their quarterback.

“Once he got outside … we had opportunities to get him, and when we didn’t get him, we weren’t going to catch him because of his speed.”

Jackson opened the scoring with an 81-yard TD with 6:35 to play in the first quarter. Morgan Academy tied it at 6-all on 2-yard touchdown by John Allen Ingram.

Wendell Jackson’s 15-yard run put the Warriors back in front at 12-6 with 8:07 to play in the third quarter. The Senators tied it at 12-all on a 1-yard sneak by Thomas 43 seconds into the final period.