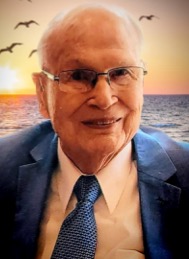 Mr. Gray graduated from the University of Alabama in 1948. During World War II, he served as a bombardier in the United States Air Force and retired with the rank of Major. He was the owner of Gray’s Furniture Store. He enjoyed the Kiwanis Club and served as Bingo Chairman for Warren Manor Nursing Home for many years, as well as being a member of the American Legion.

Funeral services will be Friday, October 1, 2021 at 2 p.m. in the chapel of Lawrence Brown-Service Funeral Home with Rev. Von McQueen and Archbishop Charles Jones officiating. Interment will follow at New Live Oak Cemetery. Visitation will begin at the funeral home at 1 p.m. The service will be live streamed online, via the funeral home ’s Facebook page, at http://WatchLawrence.Live

Pallbearers will be Gray Cogle, Wesley Blake, Randy Smith, Buddy Howorth, Bish Rockwell, Phillip Coburn, Wayne Calloway and Mel Heinz. The family is eternally grateful to the staff at Cedar Hill and the local UAB family practice for their care for Charles. His devoted sitters were Lorece Lemon, Annie McMillian and Princess Anderson. We thank them for their years of loyal care and compassion so generously given to our loved one.