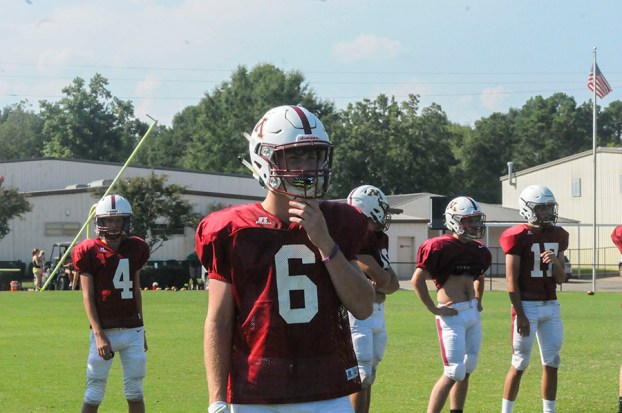 Week 3 of the 2021 season proved painful in more ways than one for Morgan Academy.

For starters, the Senators suffered their first loss of the year, falling 12-9 at Monroe Academy in AAA, Region 2. The setback dropped Morgan Academy from No. 5 to No. 9 in the Alabama Sports Writers Association AISA state poll.

Secondly, Morgan Academy lost its top receiving threat, Rhyne Williams, to a broken collarbone suffered while make a 50-yard reception in the first quarter. Williams stayed in the game but was hampered by the injury, and Senators coach Danny Raines said afterward it affected his team’s passing game.

Williams, who had 19 receptions through the season’s first two weeks, was scheduled for surgery Wednesday, Raines said.

“He has worked diligently to have the type of season he was having,” the coach said. “We’re praying we can get him back later on in the season. He deserves to get back. He has put a whole lot into that season.”

Meanwhile, the season marches on in the form of a trip to Southern Academy (0-3, 0-1) Friday.

Raines said his squad has worked on reshaping its passing game with Williams out.

“We’ve moved people around this week,” he said. “Hopefully, it will go well. We’re optimistic about it.”

The Cougars lead the all-time series against the Senators 8-4 and have never lost to Morgan Academy on the field at home. The Senators did accept at 1-0 forfeit in a game scheduled for Southern Academy in 2011.

Morgan Academy won at home 47-26 in the last meeting between the teams last year.

Raines said Southern Academy has some good skill players and added that his squad is not good enough to just show up and beat anybody.

“They’ve got some guys who can really go, so we’re going to have contain them,” the coach said. “They’re 0-3, but they’ve played some good people. Wilcox Academy is a good team. It was 7-0 in the first half and they pulled away in the second half. We’ll have to have a good night to win.”

Williams’ injury wasn’t the only factor that hampered Morgan Academy at Monroe Academy.

The Senators had trouble getting off the field defensively, giving up several conversions on third and fourth downs.

“It was just making crucial mistakes,” Raines said. “It wasn’t one certain thing. They just happened to get us, but we’ve got to get off the field on third and fourth down.”

Raines said his team appeared to have put the loss behind it entering practice this week.

“They’ve done a great job,” Raines said Wednesday morning. “We’ve had two good days of practice so far. They’re a resilient group and they’re smart also and they know we’re going to do everything we can to get back on track.”