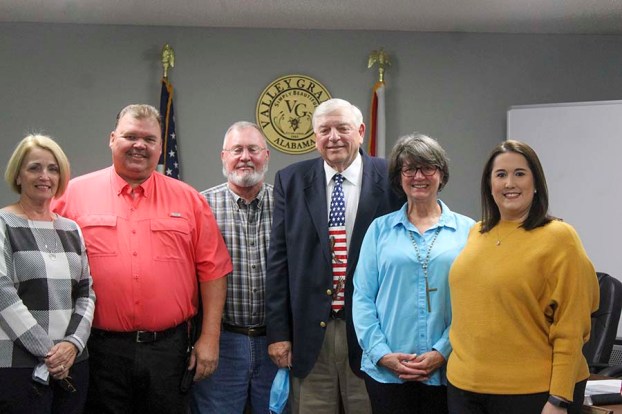 The Valley Grande City Council  had a packed agenda for its Council meeting on Tuesday night.

The meeting was moved to Tuesday from Monday because the regular time fell on Labor Day.

Labbe announced that Governor Kay Ivey sent a letter and informed the city received a TAP Grant over $500,000 to fix County Roads 16, 81 and the sidewalk.

The council unanimously approved  purchasing four 45-minute packs for the Valley Grande and Summerfield Fire Departments. Each fire department would get two each. The departments previously had 30 minute tanks.

Labbe, Hughes and Valley Grande Public Safety Director Boyd Pugh said the money would come out of the Safety Budget, which had $42,000 in the account.

“When they fail the test, you get them serviced,” Pugh said. “If the packs are taken care of, they can last 25 years.”

-The ordinance for the 2022 Budget Proposal was put on first read. Labbe hinted that the budget will be over $1 million.

-A Resolution Amendment for Subdivision Ordinance was also put on first read.

Labbe presented the council with a proposal at the previous meeting  requesting to chance the size and shape of the lots.

-The Park Security Gate situation at the City Park has been put on hold.

“Until we get the ditch situation and fence situation resolved, we can’t take care of the security gate,” Labbe said.

-A hearing for Candice Allen regarding to divide property on Valley View Drive will be held September 27 at 6 p.m. at Valley Grande City Hall.

-Day updated the council regarding the Fall Festival scheduled for Oct. 9. She said that the Rock climbing wall fee was paid.

Day added that she’s talking to several vendors and Dave’s Market about purchasing pumpkins for the event.